Parade: A Folktale by Hiromi Kawakami 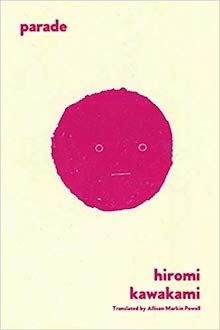 The two beings looked exactly like the spirit creatures I had seen in folktale books — they had human bodies, red faces with long noses, and wings. You mean tengu? Sensei asked. Yes, these were tengu, I replied. Their faces were beautiful shades of red, just as depicted in books.

So runs Hiromi Kawakami’s Parade, a fabulist story in the best presentation of the genre. Either it’s supposed to be totally true or totally made up, but thinking too much about which it is will make your brain hurt and suck the joy out of a lovely story.

This slim book meets back up with Tsukiko Omachi and her former high school teacher from Kawakami’s earlier novel Strange Weather in Tokyo on a hot, sleepy afternoon just after the rainy season has ended. Tsukiko and Sensei prepare somen noodles with an array of condiments and Sensei asks Tsukiko to tell him a story. Half asleep, Tsukiko weaves a tale of the two tengu, red animal-like creatures from Japanese folklore, who followed her everywhere she went in the third grade.

Tsukiko is surprised to find that her mother can see them, as can a few children at school who also have fantastical friends attached to them. And yet, it all feels so very ordinary. Tsukiko is poised right at the end of childhood, where imagination and reality are in constant conversation with each other.

Meanwhile Tsukiko goes about her life. She receives a bad grade on a test. She goes to an abacus class after school. And she watches as another girl, Yuko, is ostracized by her classmates.

Tsukiko navigates these events just as she is now, thirty years later, navigating her relationship with Sensei. Are they friends, lovers, or student and teacher? Through retrieving this story of girlhood and fantasy, she’s letting Sensei in on a vulnerable part of herself.

By foregrounding the story in a meal shared between Tsukiko and Sensei, Kawakami imbues the tale with a sense of timelessness, heightening the fabulist telling. Besides a reference to a train and a Japanese comedian, this felt so very human that it could have taken place in any decade, maybe even century. Adolescents quarrel, students struggle with school, parents pass on wisdom.

Within the story Tsukiko tells, the tengu lick butter from a tray and slurp nectar from azaleas. In one moment, Tsukiko’s mother stayed

perfectly calm as she held the string of her tea bag, swaying it back and forth in her cup. [She] liked to say that swaying the tea bag brought out the prettiest color in the black tea.

Despite the fantastical elements in Parade, this delicate appreciation of food and its relationship to Tsukiko and Sensei demonstrate the same hallmarks of Kawakami’s writing found in Strange Weather in Tokyo, creating a stylistically seamless link between the two stories.

Beyond being an exemplary instance of fabulist writing, Parade also makes the case for the tiny novel. Upon finishing it, one wonders why there aren’t more tiny novels like this available. Why hasn’t this ushered in a slew of copycats? Maybe because not everyone can pull off such pleasurable reading in such a compact frame. Not everyone can leave the reader feeling satisfied, like they have read a complete novel in so few pages.

Slimmer than most novellas, Parade’s 79-page narrative is sparsely laid out, with some paragraphs or even sentences lying on a page all to their own, such as the beginning:

Tell me a story from long ago,” Sensei said.

It is also interspersed with sketches, poised exactly at the right time. Two pages covered with tiny hash marks follow a description of the tatami mat’s imprint on Tsukiko’s skin as well as the tapping of sensei’s fingers on her palm. Later, as Tsukiko tells her story, the lines appear again, after the paragraph:

The aroma of our school lunch wafted from the hallway. A burst of laughter erupted in another classroom. The row of poplar trees in the schoolyard caught the sunlight and glistened.

So too, the small matte cover feels so good, so delicate in the reader’s hands.

The structure lends itself to either reading it fits and spurts stretching the reading out over days or in one short chunk of time.

Kawakami is restrained in her descriptions and each little detail feels exactly right, needed and not superfluous, as her mother with the teabag or the tengu licking the butter. Her precision lends itself both to the structure of the small book and to the fabulist style of story. More than being a novella, which is something between a very long story and a short book, Parade seems like a flash novel. And just like true flash fiction, it invites rereading almost immediately. And while it stands alone from Strange Weather in Tokyo, I found myself wanting to read that precursor right away, though neither story necessarily needs each other.

One various readings, I’ve wondered, are the tengu real? Is Yuko real? Does Tsukiko believe the story? Does Sensei? Does it matter if any of it is real? That’s the only one that I have an answer to. It does not matter. As Sensei says, it’s a good story.

I can imagine keeping this book on a coffee table for a friend to pick up and read while I’m running late, or lending it to friends just to enjoy their reaction to its matte cover and tininess. In a busy world, this little book feels like such a delight from the moment one lays on it and never veers away from that.

Hiromi Kawakami was born in Tokyo in 1958. Her first book, God (Kamisama) was published in 1994. In 1996, she was awarded the Akutagawa Prize for Tread on a Snake (Hebi o fumu), and in 2001 she won the Tanizaki Prize for her novel Strange Weather in Tokyo (Sensei no kaban), which was an international bestseller. The book was short-listed for the 2012 Man Asian Literary Prize and the 2014 International Foreign Fiction Prize.

Allison Markin Powell is a translator, editor, and publishing consultant. In addition to Hiromi Kawakami’s Strange Weather in Tokyo, The Nakano Thrift Shop, and The Ten Loves of Nishino, she has translated books by Osamu Dazai and Fuminori Nakamura, and her work has appeared in Words Without Borders and Granta, among other publications. She maintains the database japaneseliteratureinenglish.com.

Judy T. Oldfield’s work has appeared or is forthcoming in Gigantic Sequins, Portland Review, Barely South, JMWW, Gravel, and many others. Her flash fiction “Their Lists Long, Their Spreadsheets Lost” was a 2017 Best of the Net finalist. She grew up in the Metro Detroit area and earned her B.A. at Western Michigan University, where she majored in English and Comparative Religion. Since that time, she has mostly lived in Seattle and abroad, but currently lives in her hometown with her husband and daughter.
Share This