Not the End by Kate Vane 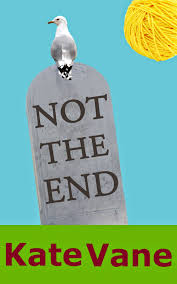 Not the End recounts how the death by drowning of Maud Smith, aged 88, off the Devonshire coast, affects the lives of three people who had never met her (alive). Kate Vane introduces her characters in quick succession. We meet Neil (cemetery manager), Trevor (owner of the flat where she lived), Brenda (who found Maud’s body on the beach) and Jim (probate researcher, ecologist/birdwatcher and currently failed academic). Then Elizabeth, with copper curls and milky white hands; Fraser McKendrie (art historian); Roisin Desouza of Goan-Portuguese-Irish-Liverpudlian descent, Jim’s boss at Generation (probate researchers); Dora Micklethwaite (the Yorkshire owner of the wool shop, A-Dora-Balls); Jim’s twin sister Edie and many more …

Neil, Brenda and Jim: from whose points of view individual chapters are told, almost a third each. Their lives are totally separate at the beginning. Their links are developed through other characters, mainly Elizabeth (who becomes Neil’s neighbour and Jim’s lover and whom Brenda meets in the wool shop) and Fraser McKendrie (whom Brenda saves from drowning, neatly bringing the novel round full circle).

It is not the loopings of the plot that make this a satisfying read nor even the relationships between the characters but the patterns in the work and especially the unravelling of the characters themselves. Neil, Brenda and Jim look back on their lives, trying to understand what has happened, what has gone wrong and why, sharing with us their thoughts, struggles and hopes.

In this homespun context, the major questions of Life are interwoven: Work, Society, Love, Families, Home. Work includes job satisfaction and decency. Society includes questions of class, type, appearance vs reality, making things (dolls, puppets, painting, gardening, knitting) (as control or coping?). What is ‘normal’? Love includes the casual, short-term, filial, lesbian … Families are central but one cannot always understand them at the moment or from the inside. And Nostalgia is the main thread, with characters looking back and, especially Brenda, not understanding change.

In the opening scene, Maud’s flat is described by Neil as “calm and minimal. Free of the detritus of family life. Walls painted landlord magnolia. A couple of abstracts on the wall adding a splash of colour.” A contrast to the messier, less pleasant homes of other characters: Neil moves into the calm flat but it is instantly changed by his complicated relations with a first and second wife (both called Lisa) and his two children. Jim lives in a cramped and dark basement flat in London (with a mortgage). Brenda’s house has a crack in the kitchen wall.

On Work: Neil wondered how people ended up in jobs that didn’t suit them.

He thought about the way it must eat at your gut, getting up every day, knowing you had to do something you hated. He was lucky. Maybe no one ever said they wanted to manage a cemetery when they grew up, but he’d found himself in the right place.

Jim was dissatisfied with his job:

In his previous life, his real life, he’d designed databases to help analyse bird populations and breeding patters. Then the database had been a means to an end. Now the databases were the end. He was quite good at it. He hated it.

And Roisin didn’t see her job as something that interfered with her life: “To her work was life.”

Brenda too has a job but it is more peripheral to her life. We meet her in shock after finding Maud on the beach and discovering that her husband Bob has left her and, despite a large amount of commonsense humour in her thoughts, we are never sure how ‘normal’ she is.

That’s when the world started misbehaving. She’d seen a woman on the beach, in a costume. A sunbather. And yet the sun was hardly up. Sunbathing, she was, foolish woman, thought Brenda, and then she got closer and she thought, why is she on her front, head out to sea? But there were always plenty like that, sitting with their shirt off in a gale, turning their legs to one side to brown the pale stripe down their inner thigh, desperate to take their tan home with them. And then she saw her head was in the water and she thought – why? And then she touched her and she was cold, like marble and she stepped away and then she phoned and—‘Bob left me,’ she said. ‘I took Prince for a walk and when I got back, Bob was gone.’

But she questions her life with a commonsense approach. She was taken to hospital after a panic attack and interviewed by a mental health nurse who counselled relaxation and breathing techniques, anti-anxiety medicine, CBT, self-help: library books, the Internet, meditation, yoga, knitting.

Brenda thought she probably had a queue of properly mad people all waiting for her help, for a cure which she didn’t have. While Brenda was keeping her talking and there wasn’t really anything wrong with Brenda, just her heart thumping in her chest and in her ears and the way her skin tingled like pins and needles and the room kept going further and further away. They smiled at each other, two people agreeing that they both had more important places to be.

Brenda does try breathing techniques, to help her sense of panic, and takes up knitting – hoping to stitch up the crack in the kitchen “neat as a raglan sleeve. “

Elsewhere, Dormouth with its tourists and day-trippers also allows commentary on British lifestyle, on class and differences:

[McKendrie] was the type that rented a caravan in a campsite on a farm, miles from the beach, and swam in a lake that looked like a sewer and bought eggs from a farmer with chicken shit still on them and thought that was real Devon life. And paid twice what they would at Dawlish Warren for a lovely beach and an indoor pool and a train line that took you all along the estuary, and still thought they were clever.

More social commentary comes through the character of Roisin who thinks of herself resolutely as working class (“It’s hereditary!”) and is badly hurt by her family who have disowned her. Neil, Brenda and Jim all look back to past homes, either in their childhood or homes of their own making or leaving. On this, Brenda says:

That was how a home should be, wasn’t it? You shouldn’t have to be running round noticing things, like on holiday where everything was different, even the things that should be the same, like cups of tea. A home and a family should just be there. They shouldn’t change.

But society has changed and families with it. Neil,

…remembered when he’d gone home with a pierced ear and his mother had nearly eaten her apron. She used to stuff a corner in her mouth if she was about to swear or say something she’d regret. She’d kept putting more and more in her mouth, still staring at him, till he was scared she would choke. Now a kid could go home with a tattoo and his mother would pull down her pants and show him one just like it.

It is the female characters in Not the End that make the novel work: Brenda, her daughter Paula, Roisin and Edie (Elizabeth less so). Neil and Jim were at first (for this reader) difficult to tell apart, although eventually Jim became quite sympathetic. The colourful cover, referring quirkily to the three main characters, to death, sun and the seaside, promises a good holiday read. Get out your deckchair!

Kate Vane lives in Devon, UK and is also the author of Recognition, a psychological crime novel set in Leeds. She has previously written short fiction and TV drama.