No Good For Digging by Dustin M. Hoffman 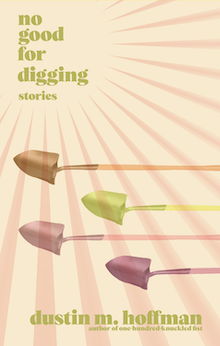 Perhaps there’s never been a better geographical setting and literary form pairing than the Midwest and the short story. Both are eccentric in their terrain, with forms unruly, and boundaries always under negotiation. The Midwest can be overwhelming in scope, and some novelists like Jonathan Franzen and Wallace Stegner have successfully contained its quiet splendor — albeit through novels with their higher page counts. As writers like Sherwood Anderson and Maile Meloy have demonstrated though, sometimes the best way to squeeze pathos out of the plains is through the short form, hinting at its odd beauty with a brief glimpse rather than a lingering stare.

If Anderson and Meloy’s stories are glimpses of alienation and yearning in the Midwest then the stories in Dustin M. Hoffman’s new collection No Good for Digging are blinks. Through beguiling and often frustrating means, Hoffman pushes both our conception of the Midwest and of the short story, re-centering them congruously as sites of mystery and magic, a place where a house painter is depicted with the same reverence as a magician and houses in disrepair are equated with castles. This slim collection somersaults and changes the pace from story to story, never settling into the commonplace long enough for a character or a place to be revealed past their essence.

Hoffman is at his best when he’s writing about the unnoticed or the taken-for-granted, de-familiarizing common experiences in uncanny ways. In the opening story, “A Nesting,” a nest of birds is trapped in the walls of a house under construction. Though there are many opportunities to set them free, the house is finished, with the speaker reflecting, “any one of us could have punched a hole and turned finished walls to fluttering.” There’s “An All-Night Diner” in which the heart is personified into a diner (in the left atrium), turning the late-night sorrows of Hopper’s Nighthawks café into a nostalgic rumination. In “To Wait for Landing” a group of friends camp out by an airport during the night, waiting for a rumored drug runner plane to arrive: “though a single plane never landed on our watch, we vowed to wait, forever if needed, to see the airstrip burst into light.”

The most beautiful and best of Hoffman’s short short stories — and also one of the simplest — “Father at Shift End,” involves a child imagining his father’s walk home from work at the factory near the house. A walk home becomes a meditation on labor, quite literally, with the speaker explaining that the walk, “gives him time to smoke and count chimney stacks and think about what he’ll make tomorrow, what we’ll make for dinner tonight, what this country will make of the great things he just helped make.”

Labor and hard work are a constant presence throughout the collection, and most of Hoffman’s characters’ lives are defined by it. In “Red Shoe Twitch,” an escape artist’s assistant finds himself buried in an Escape Cube, buried six feet under, after being convinced to test it out by a boss who may or may not hold a grudge against him. The assistant considers all the reasons for this betrayal while coming to terms with his own mortality. The title story “No Good for Digging” is the realistic, omniscient foil to “Red Shoe Twitch,” in that a plumber is accidentally buried at a work site, and an entire community works together to free him. No details of the plumber’s life are given, the action now de-dramatized.

In the playful “The Life Model,” a narrator calms his unnamed subject’s mind as he prepares to use their life as the basis of a story:

I know. I know: What if they laugh? What if they find you disgusting, unfit for art, for charcoal dust and crumpled page? Let my blood warm you, let our temperatures combine, our fears, combine.

The story becomes a pastoral of the body with the artist encouraging the subject, comparing him to a landscape painting which “cannot compete with your flawed map, freckled skin, curved penis, wrinkles and stretch marks.”

The collection coalesces in this adulation of the ordinary, but for all of Hoffman’s formal daring, he tiptoes the line of being too earnest. The structure of the collection is exhaustive too, with an unstable pacing and stories that feel out of place. For instance, “The Magician’s Secret” is compelling in its Q&A structure with an interviewer questioning an unnamed source about a long-withheld secret. The story is sketchily drawn though and seems less assured and more a mode being explored rather than utilized to more potent means. Some of the short short stories land with less grace than others, their frame more unstable. Many stories use the body as a metaphor for landscape, an internal journey taken quite literally, but it starts to become less potent. Like in “Interstate Intestine,” about a troubled move in which the speaker’s girlfriend has to “stop and snap a picture of every polyp,” or in “Amateur Paleontologist Stumbles into My Foot” where the speaker’s bones are discovered by a paleontologist, presumably in the future. In the writer’s desire to construct a new body politic of his subjects, he chases his metaphors here too directly, which upends some of the more imaginative, darker work found in the collection.

The best stories in the collection are the longer ones, where Hoffman’s characterizations are more fleshed out and allow the reader to dwell. Especially “The Ouija Board Inspector,” which concerns a group of women who work in a Ouija Board production line and start an uprising when they start to doubt the man who inspects the boards for their spiritual soundness may be a fraud. Or “On the Strongest Man Compound” centered around a man who is losing muscle mass in a compound comprised of the strongest men in the world. These longer stories reveal Hoffman’s knack for bringing disparate ideas together in uncanny ways, are most felt when he sustains the world-building, refracting the reader’s every impulse of what will happen next.

By juxtaposing oddities and the ordinariness of everyday life throughout the collection, every detail becomes exquisite and mundane in equal measure. No Good for Digging is not only an empathetic work, but an active examination of the process of empathizing. By estranging us initially, Hoffman asks us to look and imagine, then ultimately, to understand.

Patrick Boyd is currently a film directing MFA student at UCLA. He has written criticism for Drunk Monkeys. He resides in Los Angeles, California.
Share This