Nights I Dreamed of Hubert Humphrey by Daniel Mueller 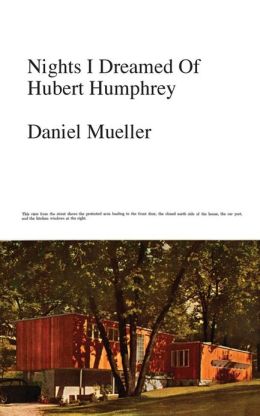 To choose pieces to include in a short story collection is a challenging task, one that needs a writer with a keen eye for finding common themes without choosing what is essentially the same story, and a keen ear that can hear the rhythm of the sentences and style. In the small press world where MFA graduates dominate, a lot of collections read more like the product of two years’ worth of workshops, and the stories begin to sound all too familiar, edgy for the sake of being “shocking,” hip for the sake of self-aggrandizement. What Daniel Mueller provides in his collection, Nights I Dream of Hubert Humphrey, is more like a boxing match during which the opponent switches tactics and moves, and the reader is knocked out with surprises everywhere, which, in retrospect are carefully foreshadowed.

In an explosive reconsideration of gender and violence, “I Killed It, You Cook It” follows two boys, the new kid in town and a feral trouble-maker who torments police and kills animals in the woods to eat. After the animal is killed, the feral boy tells the new boy to cook the animal, suggesting the newcomer is his wife. When the two climb the town water tower, the seedier of the two nearly rapes the new, both of whom are only about to enter sixth grade, before falling off the tower to a bone-snapping death, one that the reader should see coming given the theme of vandalizing from precarious heights, but ends on a cold, silent note nonetheless.

This coldness in the wake of death not only applies to the dead, but to the living, too. In “Say Anything and Everything,” a boy is given an award by the state senator, Hubert Humphrey, for his school project. Mueller describes school children and teachers like cattle waiting to be slaughtered and placed on meat hooks in a freezer:

The students, seated on the floor by grade and class, formed a shadowy mosaic. Along the perimeter stood their teachers, their eyewear glinting like quarters on the eyelids of corpses.

There is a true distance between human emotions and the scenes Mueller describes. What you don’t know is that he is preparing you for an explosive series of raw clawing desperate souls aching to be somewhere outside of their bodies.

A young man distant from both his mother and father becomes romantically involved with an older man named Gerald, who is a contractor in direct competition with the young man’s father. In a desperate attempt to get both men to see him, the narrator reveals his body and soul publicly:

Gerald stood on the stoop in his pinstriped pajamas as I performed a striptease, prodding him the while to hold me, kiss me, save me from myself. He could have me any way he wished, I said, if only he would demonstrate his love for me, and demonstrate he did as my father, in plain view on the second story of a house he would never finish, looked on.

Love and death can easily be two sides of the same coin, but Mueller’s stories conflate the two, and it’s easy to expect death and get love, or, even more surprising, expect love and read death. The last story of the collection follows a young man off the beaten trail near Yellowstone posing as a hippie who doesn’t know he’s a hippie. When he encounters a miserable married couple, Carla and Ron, who begin to follow the narrator through the woods, hunting, eating, and camping together. Carla and Ron manage to (or eventually) reconcile using the narrator’s attitude (fueled by his embellished stories) as wisdom. While they make love in their tent, Ron calls out to the “hippie” in his tent, asking the narrator if he would like to join in their lovemaking. Happy to join in, the narrator takes pointers from Ron about how to satisfy Carla. Ron then decides to show the narrator how it’s done, and as the narrator watches Carla and Ron together, he is impressed by the ferocity and tenderness in juxtaposition in Ron, causing the narrator to kiss Ron. The narrator can’t decide if the kiss means something or nothing, but Ron threatens to kill both the narrator and his wife for the kiss, again showing Mueller’s skilled surprises and the way he subtly merges love and death within a series of narrators who are often unfamiliar to themselves.

A powerful writer, it’s not necessary to see a novel from Mueller to experience his depth and scope as a wordsmith—especially considering the collection’s unified feel as a result of like-minded narrators, all male, all ambiguous about those firm boundaries in life.

Daniel Mueller is the author of How Animals Mate, which won the Sewanee Fiction Prize. He is the grateful recipient of fellowships from the National Endowment for the Arts, Massachusetts Cultural Council, and Fine Arts Work Center in Provincetown. He directs the creative writing program at the University of New Mexico and teaches on the faculty of the Low-Residency MFA Program at Queens University of Charlotte. He lives in Albuquerque.

Melanie Page is a literature professor and short fiction writer living in Indiana. She is a regular reviewer for JMWW.