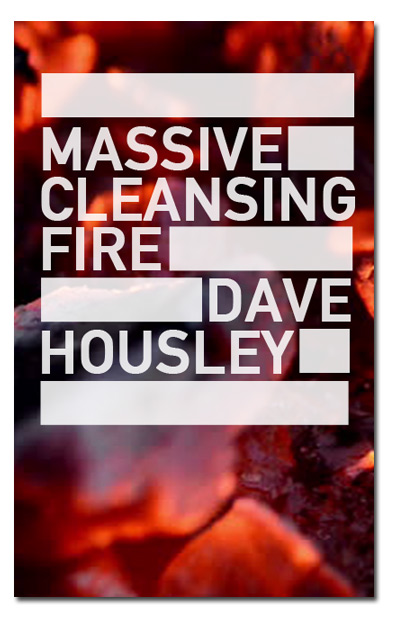 Apocalyptic fiction was already a mainstay of twenty-first century literature, but the political climate of the past year has only made the threat of an impending doomsday a more frightening possibility. Fiction writers not already pondering climate change catastrophes, pandemics, or fascist regimes still have time to consider the end days, however. 2017 begins with Dave Housley taking a meditative and sometimes amusing look at cataclysmic endings—many of them fire-related—and their aftermaths. While not overtly political, Housley’s fourth collection still might qualify as a book of its time for its depictions of the every man and woman forced to demonstrate resilience in the face of adversity. Billed as a series of linked stories, Massive Cleansing Fire works best when Housley focuses on recurring characters and settings that allow the reader to identify with a character’s hardship and motivation to thrive. The collection sputters where resilience is absent and stories fail to connect to this principal theme, but, more often than not, Housley succeeds in spite of all the fiery conclusions.

The opening story, “The Combat Photographer,” introduces the collection’s most-often seen character at a crossroads of professional and personal life. “The combat photographer needed health care,” Housley begins, and in similarly clipped sentences, he disregards what we might assume are the likely reasons—war, terrorism—and settles on a more mundane explanation: “There was a baby on the way, and his wife was drawing the line.” The juxtaposition of a globetrotting lifestyle and one rooted in domesticity confounds the combat photographer, and the story follows its protagonist as he secures a museum job—benefits and health care included—but ultimately finds the work monotonous and lacking the flair of his previous work. While he benefits from the perks of the job, he fails to find purpose in it and takes to walking aimlessly through city streets:

He tried not to think about what was happening to his body and mind, to his combat photographer’s soul, but it was a long walk and unlike similar walks he might have taken in Mogadishu or Kashmir, there was nothing to do but think.

Housley tracks this loss of purpose in a measured and emphatic fashion but allows his protagonist a parting opportunity to redirect his course. When his wife calls to alert him that she’s gone into labor, the fire alarm in the museum sounds. Despite the rare instance of happenstance, the combat photographer forsakes his familial duties and in the final moments of the story, he grabs his camera to rush into the blaze. What the ending of “The Combat Photographer”—and the endings of many stories in the collection—demonstrates is a willingness to accept adversity, to face destruction and danger head on. It’s that kind of fortitude that will endear the collection to readers. Apocalyptic tales aren’t uncommon anymore, and the books with a lasting impact are those able to capture the commonplace triumphs of the everyman and everywoman.

In later stories featuring the same combat photographer and Mary, his wife, each character takes on the role of protagonist and surveyor of potential harm. Mary becomes the focal point of the collection’s final two stories, and in the last piece, entitled “The Fires VIII,” one of the many short shorts Housley intersperses throughout the book, she finds herself in some kind of aftermath:

The feeling was like stepping into an ice cold bath: she woke up neutral and then remembered everything, the sickness and the bird and then the fires and now. … she wasn’t really expecting there to be anything next. She was alive and the simple fact of it was more of a curse every day. Every night she went to sleep hoping it would be the last time. Every day she woke up and wondered why, how much longer, if the dogged sense of duty would desert her today and finally allow her to put the gun in her mouth and pull the trigger.

She studies her surroundings, recalls her now-deceased husband and child, and even contemplates death by her own hand, but by the story’s end, Mary contemplates the possibility of survival, willing to risk whatever it may take to reunite with civilization: “It was a ten mile walk into the District. If there were people still alive, she imagined they would drift in that direction. She looked for something to carry but nothing remained. She went to the street and started walking.” The story and collection end on a note of resolve. In “The Fires VIII,” Mary shows a determination to proceed into the unknown. In such a short piece, Housley manages to hone in on very real emotions, and the results are particularly moving. Taken in contrast to a much longer work (say, Station Eleven, a novel Housley makes a brief allusion to elsewhere in the collection), “The Fires VIII” never lingers, and its brevity makes it one of Massive Cleansing Fire’s best pieces.

“The Fires VIII” not only serves as a fitting finale but also a compact short piece. Throughout the collection, several such pieces fall between longer stories. While sharing similar themes as these longer pieces, some of the stand-alone short shorts often read as disjointed or perhaps even atonal to the unity of the collection. “The Fires III” will remind long time readers of Housley’s work of his earlier collections; here, the short piece centers on a State Farm Insurance worker named Jake. Some readers, undoubtedly, will recognize that Housley is slipping into parody, but unlike the television commercial that spawned Jake from State Farm, “The Fires III” ends with Jake, all alone in a smoke-filled office, choosing to forgo the aftermath of the apocalypse by reaching for a gun. The bleak ending counters the more hopeful endings seen elsewhere in the collection, and for some, the focus on a commercial figure—a subject Housley explored in his collection Commercial Fiction —may seem jarring.

Housley, noted for his astute observations of popular culture, continues to demonstrate a perceptive viewpoint of contemporary customs with Massive Cleansing Fire. Readers can only hope that the endings predicted by these stories don’t happen anytime soon. And if they do, Dave Housley has laid out a framework of what we might expect.

Dave Housley is a founding editor of Barrelhouse Magazine and a co-founder and organizer of the Conversations and Connections writers’ conference. He is the author of three previous short fiction collections, including Commercial Fiction (Outpost19) and If I Knew The Way, I Would Take You Home (Dzanc). His work has appeared in Hobart, Mid-American Review, Nerve, and elsewhere.