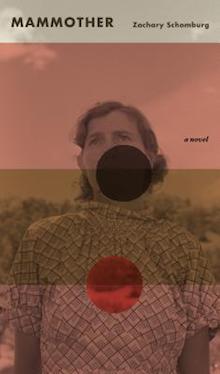 The plot of Mammother moves quickly. Every page or two leads to another death or transformation in the town of Pie Time, the fabulist community where the novel is set, and the residents of this small town, who have little or no time to accept the calamitous position they are in, begin to adjust their lives to accommodate a constant state of grief. As a premise, this would seem almost comedic, something out of a Donald Barthelme short story, but because Zachary Schomburg is coming to this novel with the background of a poet (having published four collections of poetry), the result is something less analytical and more intuitive, the way a collection of songs may reveal more about a place than a description of its geography or water table. Instead, the extraordinary events that occur in Pie Time are not didactic but probing, because at its core Mammother is a novel concerned with discovery.

Pie Time has a lot of problems. Its main industry is a factory that makes cigarettes and beer, with no concern for child labor laws. Its faith is uncertain, and dabbles in voyeurism. And it is eventually co-opted by a headless corporation called XO. But all this is simply groundwork for the main conflict, a deadly and mysterious affliction that leaves its victims with a hole in their chest where a “death thing” appears. A death thing can be just about anything; a black poodle, a cake, and a radio are just a few examples. No one in the town can explain the cause of this affliction, which leads them to believe that it must be the work of some higher power. They call it God’s Finger, and the fear it instills divides the town, which allows the corporation mentioned above, XO, to move in, seeing the division as an opportunity to make some money, and they begin selling body cages to the community as a way for the townspeople to safeguard themselves against God’s Finger.

Mano Medium, the protagonist, stands firmly against XO and its body cages, and preaches a kind of gospel of death, telling his customers at the butcher shop, “Death is where meat comes from.” He is not promoting death as much as he is promoting the acceptance of it as a natural way of life, but his approach is not without its own set of problems. While he helps those who are willing to listen by giving them “Death Lessons,” he is still blinded by the aftermath of death. His coping mechanism becomes an act of hoarding. He collects all the death things, and carries them with him at all times, which transforms his body into a cage of grief, the antithesis to the XO life cages that the rest of the townspeople are wearing.

Mano’s grief drives the story forward. He loses those who are closest to him, and he ponders openly his actions, whether he is grieving out of love or out of loss, the latter carrying with it a level of selfishness in Mano’s eyes. Others in the town, specifically those who haven’t embraced the savior consumerism of the XO corporation, struggle with similar internal questions, which splits the people of Pie Time not between consumerism and communalism, but between a willing ignorance and a intellectual paralysis. Each character not siding with XO moves inward instead of moving forward, and that side of the town slowly begins to implode. Pie Time’s priest, Father Mothers III, experiences this literally when his church collapses after he builds a cross too large to bear.

And with that, came the explosion that everyone had heard. At first, Mothers, too, thought it was an earthquake, but an earthquake that was coming from above… The obscenely gigantic cross Mothers had built just a few days earlier on Ash Wednesday was far too heavy for the small concrete foundation that he had poured for the roof… The cross came crashing down through the old roof of Lady Blood, tearing apart every piece of the unsound structure.

This literal manifestation of the internal conflict of each character blends with the fabulist style of the novel, but also helps focus a book that seems to have an endless cast of characters. The beginning of the book features a character list to help keep track of who is who. Most characters are named simply by their occupation: The Shoveler, The Lawyer, The Baker, and so on. Most of these side characters act as a chorus, becoming the voice of the town and, in the process, the voice of reason. While those who bear actual names are characterized by extreme calamity, the chorus clings to fear and guards against it with a general blend of conservatism, conformity, and consumerism.

The chorus comes to represent a lack of concern this novel has for characterization. These identifiers act as shorthand for character development, and the ease with which they are used seems careless — that is until one considers all that the book is unable to label. For example, Mano has no problem at all assuming the role of The Butcher once the original butcher dies, but when he is asked to explain his relationship to The Butcher’s son, he cannot. This creates a distinction between societal roles and personal roles, and adds an underlying level of meaning to the position Mano is in, along with the rest of the town who have chosen to identify not as an occupation but as an individual with a name.

This distinction also sheds light on the focus this novel puts on gender and sexuality. It would seem that the most important aspects of Mammother are the issues that can’t be labeled or defined by its characters. At the start of the novel, Mano is a girl working in the only factory in Pie Time, making cigarettes, but eventually he becomes a man and realizes it is no longer right for him to work at the factory, a place that employs only young girls. He makes the decision on the basis of maturity and not the fact that he has switched genders. A similar switch happens later in the book when The Foreman, Mano’s old boss, dresses as his dead wife. The reaction he gets is morbid and confusing, but perpetuates the inability to label this issue of gender fluidity and the struggle this fabulist town has with identity:

He became her. It was so uncanny this becoming of his late wife, that most people in the crowd shouted June Good’s name as The Foreman took the stage. There was so much applause, in fact, that Father Felipe had no choice but to announce The Foreman as the winner.

The title of the novel might be the best source for understanding the struggle Pie Time has when placing specific labels to personhood. It comes from the title Mano’s deceased father gave himself. “He called himself The Mammother,” Mano’s mom explains near the beginning of the book. He hunted mammoths, but after she tells Mano that Mammoths don’t exist, she says, quoting Mano’s father, “Only the greatest hunter can find what doesn’t exist.” The search for the unsearchable and finding what is essentially not findable might be the true experiment at work with Schomburg’s first foray into the novel. Even though it may not provide many answers for its characters or its readers, Mammother explores the questions it poses honestly and earnestly, and creates a world that is truly unique.

Zachary Schomburg is the author of four books of poetry: The Man Suit; Scary, No Scary; Fjords, vol 1; and The Book of Joshua. He is also the publisher of Octopus Books, a small poetry press. He lives in Portland, OR.

John Thurgood is an Associate Editor at Southern Indiana Review and a Staff Writer at News 4U. His fiction has appeared in Story|Houston, Another Chicago Magazine, Monkeybicycle, and elsewhere.