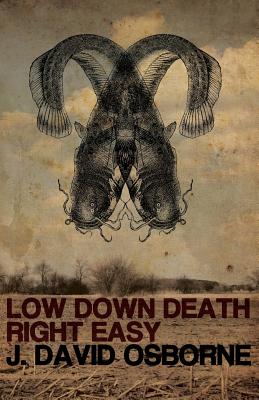 How many times will I apply for a job over the course of a lifetime?

It pays the bills—something to remember while waiting in line, while waiting anxiously for the job interview to begin. Better believe you’re surprised you’ve gotten this far. They call you in for an interview. It means your application made more sense than the others. Maybe you feel really positive after the interview. Every question answered honestly and confidently, and yet, even if you get the job, everything comes down to the realization that most jobs are temporary pardons from the familiar, nauseating stench of desperation. Want to know something though? Desperation never gets any easier. You get more creative and less rigid with the criteria for your job search. First up are the jobs you’d like, followed by the jobs you wouldn’t mind doing. Give it long enough and you’ll apply for just about anything.

For the characters populating J David Osborne’s latest, Low Down Death Right Easy, a job doesn’t mean much more than another flyspeck on the windshield of some old pickup truck. It’s there, and it must be dealt with. Much can be said for death. It is there, every step of the way, itching to claim as much as it is used as a threat. Death claims a loved one, but it’s never any closer than the occasional punch to the gut and the rotting away of teeth. Someone overdoses. Someone might break a jaw, but the desperation is ever-present, the days are growing longer.

Here’s my gripe. I know it’s not your fault. But that’s my gripe. It’s never anyone’s fault. There’s never anyone tangible that can take the blame for anything. Faceless corporations set these rules, and then they hire poor folks like you to do this menial labor for pennies. So, you have to do it. Because what are you going to do, not follow the rules? But then, when shit like this happens, who am I supposed to complain to?

Everything’s low, everything’s high, everything’s strange, and everyone’s just trying to feel normal. Whatever that is. Take into account that this is just another day in paradise, your normal life, devoid of the mania of social media, the obsession of celebrity glamor, and what you have is akin to a snapshot of all-things mundane, making do, a paycheck, a “living.” We all go to work to earn a living but the question to be asked is whether or not the work is worth it if the “living” we receive is riddled with strife, frustration, and unending difficulty. Low Down Death Right Easy carves into the dry, cracking dirt, as if to say:

I mean, who wouldn’t keep fighting instead of standing still?

“I caught my old lady with my best friend. I tied them to a chair and stabbed them and when I got tired of listening to the screams I lit them on fire.”

Sepp put his plate down. “Why only twenty-five?”

“I should have claimed that. I was trying to eat, officer, and the hunger drove me temporarily insane.”

“What did you learn?”

Indeed, what do we learn except how to get by better next time? Do we learn to balance our checkbooks or are the funds already gone before the ballpoint pen touches the page?

With Low Down Death Right Easy, J David Osborne catalogs the descent into the poverty line. There are voices, plenty of voices speaking up, loud and desperate. They speak in even tones, frequently passing the narrative back and forth in a daisy chain of short, lucid, one to two page chapters. One voice belongs to Danny Ames who spits out teeth while searching far and wide for his missing brother. There’s also the voice of Arlo Clancy doing his best to stay straight – no more crime – but ultimately, all these voices collide into a gritty tapestry of subversive drama the likes of which I’d compare to Harmony Korine’s Gummo packed in with the short, terse lines of Charles Bukowski and all rolled up with death metal and other deadly beats. It’s the one spliff that you’ll do well to light up and smoke until everything, even the impossible, seems muted, and downright easy.

““If you haven’t spent at least one night staring at the ceiling yelling ‘Fuck you,’ you might not be a real person.’”

I’m a real person. I have yelled those two words loud enough and long enough to lose my voice. J David Osborne knows real people. He lives among them and might very well be capturing the voice of the crowd, our voice, collectively. I have spoken to Osborne and the topics and themes outlining our conversations are the stuff of the life that we all are attempting to live.

I’m still surviving—debt, delusion, one last desperate attempt at being heard. I’m surviving and I could really use a smoke. After reading Low Down Death Right Easy, you might just figure out what it means to get by.

Because we all are, even those with the currency to delude.

J David Osborne lives in Norman, OK with his wife and dog. His work has appeared in Warmed and Bound, John Skipp’s Demons, and several other online and print publications. He is the winner of the 2010 Wonderland Award for Best Novel for By the Time We Leave Here, We’ll be Friends.


Michael J. Seidlinger is the author of My Pet Serial Killer, The Sky Conducting, In Great Company, The Day We Delay, and a limited edition collection of experimental musings called The Artist in Question. He can be found at “The Feature S P A C E_”:http://michaeljseidlinger.com/