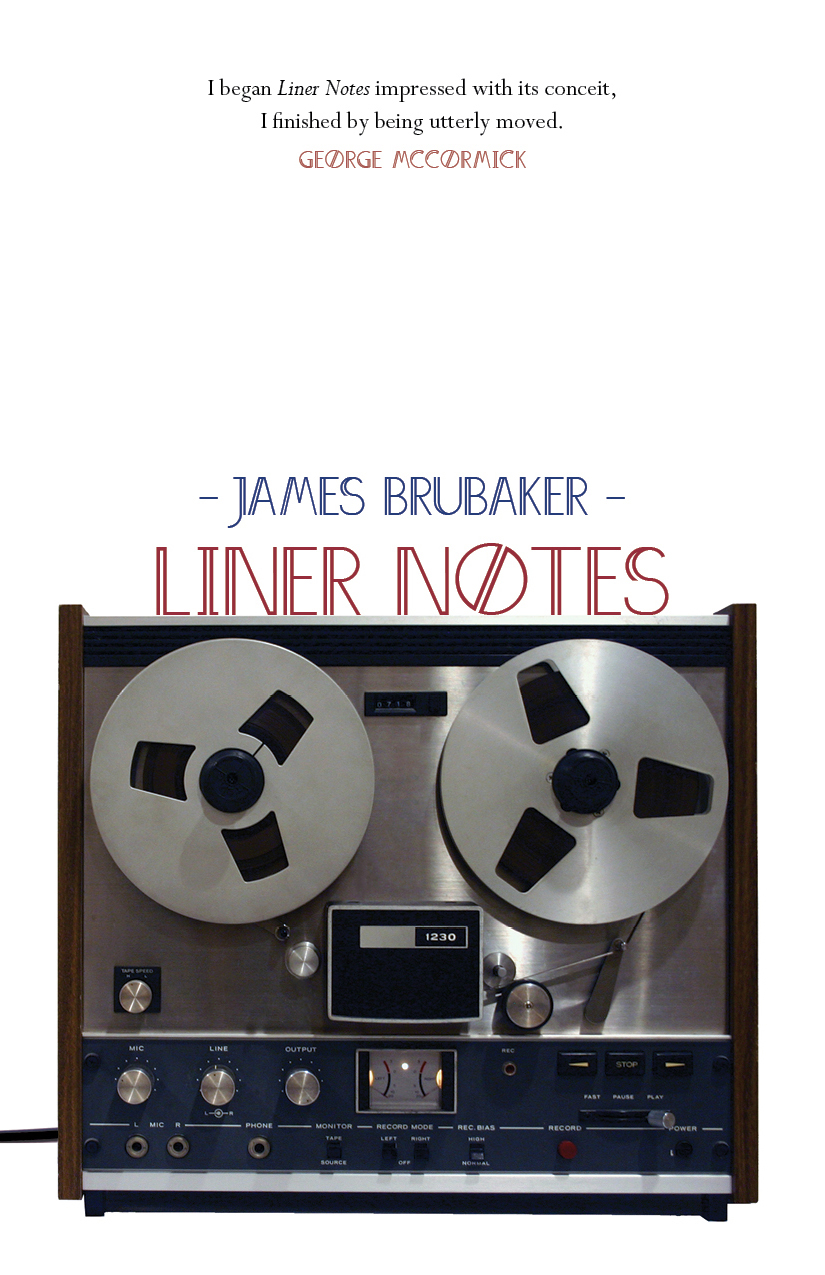 Greil Marcus describes the feeling of listening to pop music, when it is at its best, as “that moment when something appears out of nowhere, when a work of art carries within itself the thrill of invention, of discovery.” It is clear from the first sentences of James Brubaker’s collection, Liner Notes, that this is a book written by someone who has spent a lifetime in familiar contact with the moment Marcus speaks of, someone who has internalized it. Where other writers might get wrapped up in describing the sound of this or that fictional band, or their backstage antics, Brubaker’s stories instead display the enviable capacity to act like great songs. To read them is to experience, as a reader, that “thrill of invention, of discovery.”

Central to many of the stories in this collection is a simple, paradoxical condition of fandom: to love music, to truly listen to it, so that it is not merely background noise while we do dishes or talk on the phone or play cards, to be truly present as a listener, is an almost wholly solitary experience. Yet, like fiction or poetry, music is a communicative act. It is about conversation (between musicians, between musician and listener); it is about connection, communion. In “Four Walls Won’t Hold You,” for example, a boy listens obsessively to a dubbed copy of Michael Jackson’s Thriller, and hidden in his room he has a kind of dialogue with himself, hearing on that record what he is unable to say to his drunken, abusive parents. Or in “Of Muscle Memory,” where we get the touching portrait of two jazz musicians who have built a connection through their appreciation of Charles Mingus’s records, but who are drifting apart as one fades into dementia and so can no longer hear what he once heard in that music, leaving each man alone, cut off.

The stories in Liner Notes shift across settings ranging from the gritty domesticity of “Four Walls Won’t Hold You” and “Oh, Yoko” to the surreal mindscapes of “Flavor Flav Travels Through Time and Reads About Himself on Wikipedia.” Dark future worlds without music appear in “The People’s Musical Heritage Museum,” and “How We Did Not Become Extinct,” a smart and beautifully observed history of a society brought nearly to ruin by “information clouds,” described as occupying a space between the sentient and meteorological.

In “The People’s Musical Heritage Museum” we are introduced to a museum curator tasked with finding musical/cultural artifacts from a time when songs were still the creations of people, not machines—a theme that runs through several stories—and there is a moment when he comes across the sunburst Stratocaster that Bob Dylan played when he “went electric” at the Newport Folk Festival in 1965, hilariously and brilliantly placed in an abandoned Hard Rock Café in Minneapolis. Here Brubaker turns this familiar cultural moment on its head, having his narrator sympathize with the booing, catcalling folkies who, in the years since Newport, have come to be seen by many as philistines, unable to let go of a scene which had calcified and ceased being inventive:

Dylan’s guitar came to symbolize, for me, something sinister, a key step in music’s reliance on, and eventual domination by technology. I was repelled by the artifact. I neither wanted to see it again, nor hang it to be displayed for the gathering masses in the museum. Why should we celebrate that which we’d lost?

This moment of reversal feels like something akin to what Marcus talks about, a thrilling appearance of something out of nowhere; or, perhaps more accurately—and appropriately, where Dylan is concerned—a beautiful reinvention of something that had always been there.

The stories that really stand out in this collection are those that borrow textual forms often associated with music: the interview, the essay, the memoir. Brubaker has a gift for finding voice in such forms, for finding interesting ways to shape narrative through them. Such choices are crucial to the success of the collection as they allow him to come at music obliquely, in a way that is familiar but slightly removed from its subject, rather than straight on. The liner notes to a record do so much more than a straight prose description of the band and its music might. The collection’s first story, “An Introduction to the Deluxe Edition of Arthur Cane Kills Moby Dick’s Whales Drink the Ocean… by Pete Welch,” opens with these words:

Let us begin this introduction by clearing up a long held misconception about Arthur Cane and his band: the man in the center of the photo that is this album’s cover, the one with the guitar hanging from his shoulder, his long, straw-blond hair blowing in the wind—that’s not Arthur Cane. Three decades of fanzines and music journos have mistaken this man—the band’s guitar player, Chuck Klaus—for Arthur Cane himself.

What unfolds from here is a search for a missing song, “Dread in Greys,” a hole in Cane’s famous album that for years fans speculated about. As in many of the stories in Liner Notes, “An Introduction…” is about obsession. It is also about learning to let what is lost stay lost. And yet the story does not show us the obsessive search for the missing song as any kind of fool’s errand; even when the narrator discovers “that we haven’t earned ‘Dread in Greys,’” that it should remain in silence, it is clear that there was always something vital in the search. And it is in examining this paradoxical idea that the choice of form, or medium, the choice to have the story present itself as an essay, reveals itself for the masterstroke it is. For we will never hear a song by reading about it—we will never hear Arthur Cane’s album—and yet we go on reading, and writing, about music, about songs, because there is something that compels us to do so. We know that reading an entire book about Bob Dylan’s “Like a Rolling Stone,” for example, will get us no closer to a definitive listening/interpretation of that song; we know the opposite will happen, in fact. Those pages will only open the song to ever more possibility. What Brubaker is engaged with, then, when he writes so wonderfully about music, is a literature of the possible. He is able to gesture towards vast blank spaces of possibility through suggestion, much as we see Borges doing when he adopts an encyclopedic voice to gesture towards the beautifully impossible, so that instead of hearing the songs he describes, it often feels rather like we are visited by their ghosts.

The book often examines, in smart and terrifying ways, how music is vital to memory and yet, as such, always vulnerable to the sickness of nostalgia. In “Haunted Resonance: A Memoir,” an aging music critic, after losing his wife, chases an urge to create music as a means of expressing his grief, since his familiar medium, writing, has failed him. The story has not one, but two sublimely transportive scenes that will stay with readers. At the story’s end, the music critic is in a grocery store, listening to Toto’s “Rosanna” over the store’s PA system, and it is a moment of utterly beautiful devastation, where a song that he has dismissed his whole life is suddenly saying something to him, speaking to him of “utter human courage and desire.” The story cannot make us hear “Rosanna” in that moment—thank God—but what it can do, and what it does, is show us the unique and familiar topographies of a very human heart.

James Brubaker s the author of Pilot Season and Liner Notes, which won the 2013 Subito Book Prize for Prose. His stories have appeared in venues including Zoetrope: All Story, Indiana Review, The Normal School, Michigan Quarterly Review, and The Collagist, among others. James’s third story collection, Black Magic Death Sphere: (Science) Fictions, recently won the Pressgang Prize and will be published in late 2015. He teaches creative writing at Southeast Missouri State University.

Bayard Godsave was born in Pawtucket, Rhode Island and raised in Western New York. He has an MFA from Minnesota State University-Moorhead and he received his PhD in English from the University of Wisconsin-Milwaukee. His fiction has appeared in, among other places, the Cream City Review, Cimarron Review, Florida Review, South Dakota Review, Pleiades, and the Gettysburg Review. He is the author of Lesser Apocalypses, a short story collection published by Queen’s Ferry Press in 2012. His second collection, a pair of novellas titled, Torture Tree, was published by Queen’s Ferry Press in 2014. Bayard is an Assistant Professor, teaching writing and literature at Cameron University in Oklahoma.