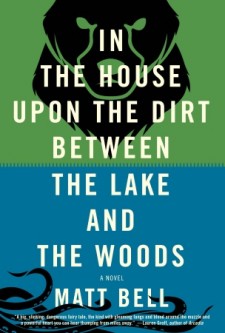 Matt Bell’s much anticipated debut novel, In the House Upon the Dirt Between the Lake and the Woods, could be briefly described as one man’s quest to redeem his marriage in the aftermath of questionable living, poor decision-making, and a series of events that ultimately alienate his wife. However, a plot synopsis of this kind won’t take us far when it comes to Bell’s work. In fact, this novel is as experimental a book as any written by those august authors with whom Bell is often compared – most notably, Italo Calvino. So what happens when a reader encounters the experimental? Usually, the critical mind wants almost immediately some language by which the work can be described, exhausted, no doubt, by cataloguing all the more readily known things that it is not. And so the search for a label – no matter how inadequate or misguided – begins. Labels, however, are often driven by fashion. Magical Realism, for example, is absolutely out. A story of “the fantastic” might be all right, but that’s such a careful phrase and so pedestrian. The canard most thrown about recently is to say that Bell is a Fabulist. But why, some may ask, must we label it at all? Why can’t readers simply consume In the House as its own strange self? Indeed, maybe this is right. Let us see.

In some ways, the nameless characters – Bell calls them only the Husband and the Wife – begin the story by acting on what could be called “Thoreauvian Fantasies.” For reasons that don’t become clear until deep into the novel, these newlyweds reject the modern world, presumably one very much like 21st century America. They want to escape into simplicity – a desire that many of us can easily identify with. What they want, or think they want, is the natural world with its quietude and beauty. A place that can be marked off, The Dirt, as belonging to them and to no one else, a place that will brook no interference, and where a new, perhaps even utopian, beginning can be imagined.

On some new dirt, I told her, she would no longer hurt herself, no longer visit upon her body what frustrations she gathered from the busy world around her, its tall buildings, its crammed streets.

Our new world, it would be quieter, simpler.

Our new world, it would be just her, would be just me, just us and the babies I then hoped – that I hoped we both hoped – would become our family.

But while Bell’s husband and wife may be able to remove themselves from civilization, they unfortunately bring it with them in the form of memory – a memory that infects this new place like a poison in the soil and then spreads like a cancer. In what seems like only weeks, the natural world and its attractions no longer feel rare and wonderful. A door is left open for old desires made new again. In this case, the desire for children, for family – and for the husband, feelings of “ownership” and “possession.”

Quickly, however, the perhaps normal desire for a family turns into obsession. Indeed, when the wife becomes “infected” by her husband’s desire for children the feeling almost immediately turns dysfunctional, first through a long series of miscarriages and then, later, when the child she conjures becomes consumed by the mother’s identity until almost all difference between mother and child is erased. The miscarriages are truly horrible, reminiscent of the nightmare children from Bell’s well-received novella, Cataclysm Baby. It could be strongly argued that In the House works as a cautionary tale about our closest, domestic obsessions, that they almost inevitably become perversions, and if we’re particularly unlucky, that those perversions can be made manifest.

What’s truly interesting about this novel, however, is the manner in which Bell has decided to populate and decorate his tale: nameless characters, nightmare children, the wife’s fey ability to literally sing the world into creation, the husband’s macabre obsession with hunting that positions him as the thoughtful Neanderthal – all these elements, combined with Bell’s high-toned language and the insinuation of the novel’s epigraph from The King’s Mirror, and the reader quickly finds themselves immersed in a hyper-realistic fairytale. A kaleidoscopic 21st century Grimm’s fairytale with its wide-ranging possibilities for allegory firmly intact.

Readers hate to endorse the allegorical. Even more than magical realism, it is despised as trite or at least reductive, lacking in subtlety. So then why does a writer like Bell chose to couch his ideas in this style? No one can say for certain. It could be, however, that in a postmodern world often dedicated to the destruction of patriarchal norms, where all previous mythologies lead to dysfunction and heartbreak, a canon must not just be smashed but reimagined, one that tells a different story for a new world.

When I say belief, I do not mean I knew what I believed, not in the way I had believed before coming to the dirt, in steepled buildings made to organize such feelings. Things were odder here than they were elsewhere, and most stories were not written so clearly: On the other side of the lake, across the mountains, the truth had been inscribed in the stars, and could not be changed. Here, upon the dirt, my wife had wiped clean that sky-flung slate, and so I was not sure what to believe, or where to look to rediscover what once I had simply known.

That the sky should be a blank slate, that in some untouched place a new system of beliefs could be made. Think of it. How many have had such a dream? The fact that Bell’s husband and wife nearly destroy themselves trying to reimagine the world may be the point. For how else might we expect, as a culture, a true change in how we think and live, even of how we understand ourselves socially, psychologically? It is not hyperbole to say that Bell’s novel trumpets to those who know how to listen that when we try to simply run away from evil, we fail to realize that we bring the germ of its future flowering within us. It is a difficult message to deliver, and like the husband in the novel, each reader must find their way to this knowledge on their own. Fortunately, that’s what a powerful allegory enables a reader to do. By stripping away so much affect, readers can more easily adapt the sentiments and actions of the characters to their own needs. This work then, after deep consideration, is a truly brave one.

At the same time, some readers will not find their way into the story, because the nature of allegory is paradoxical. The very elements that allow for a personally meaningful reading of the text are the same ones that that will alienate a reader more used to the subtleties and typical character development of realism. There is no chit-chat here, no witty repartee between characters, there are very few pieces for Bell to move around “the board.” It is elemental – a word that Bell plays with throughout the novel. Because of this quality some may have trouble sympathizing with the husband and wife in the normal way.

Even with that said, few readers will ultimately fail to be moved. There is a moment in the story where the wife has left, used her powerful voice to create a new dwelling, a new world for herself below “the dirt” of the real one inhabited by the husband. For a long while, the husband uneasily accepts his wife’s decision to leave him. He misses her, terribly, but he believes her decision is just and wants to respect it. Eventually, however, his loneliness and alienation become too much to bear and he embarks on a journey below the dirt, beneath the house, to find her. This journey is quest-like and reminiscent of the macabre feeling of Galahad’s quest for the Holy Grail in John Boorman’s 1981 film, Excalibur, full of pain and filth and death lingering around every word.

Does the husband succeed and win back his wife? Does Bell contrive a happy ending for his married couple? No spoilers here. But the husband does find within himself the deep desire to make amends:

To do everything differently because what was already accomplished had failed to provide what life I wished, and only some new way seemed likely to save our family from this long fall, this world beneath the slow-sinking moon…To the very end, I had always been the weakest one, and yet it was only I who had gone on and on.

Perhaps this is where Bell wants us to arrive: scarred, beaten down, all our illusions about ourselves and world we make physically ripped away so that we almost beg for the story to be over, so that we may be allowed to look away again and forget what we know. And yet to understand, deeply, that such escapism only leads to more pain – that what we really need to do is to rethink…everything.

Matt Bell is also the author of two previous books, How They Were Found (Keyhole Press, 2010), Cataclysm Baby (Mud Luscious Press, 2012) as well as several chapbooks: Wolf Parts, The Collectors and How the Broken Lead the Blind.

Jeffrey Condran is the author of a story collection titled, A Fingerprint Repeated, and a novel, Prague Summer. His work has received several awards, including The Missouri Review’s 2010 William Peden Prize and Pushcart Prize nominations. He is a professor of English at the Art Institute of Pittsburgh and co-founder of Braddock Avenue Books.