In the Body by Allison Baggio 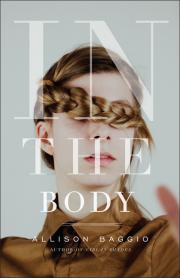 All of life is a complex interplay between the contemplative and the corporeal. Our experience of our bodies—how they make us feel, whether they define us, the extent to which we seek to control our own and those of others—forms the backbone of In the Body, a provocative new collection of short stories and a novella by Toronto writer Allison Baggio. With careful, deliberate prose, Baggio explores uncommon and exceptional circumstances to seek broader truths about our relationships to the flesh we inhabit.

Baggio’s prose is informed by a Canadian sensibility. Her prior book, the debut novel Girl in Shades, told the coming of age of a teen coping with the cancer death of her mother while seeking emotional sustenance from the music of Montrealer 80s heartthrob singer Corey Hart. While the majority of the stories of In The Body feature cultural touchstones that firmly set them in or near the Great White North, they expose universal preoccupations. After all, what person has never experienced feelings of ambivalence about his or her own body?

In the spirit of fellow Canadian writer and current Guggenheim Fellow Barbara Gowdy, Baggio frequently mines uncommon characters and unusual events in In the Body to examine the human condition. In “One Too Many,” for instance, auto worker Theo agonizes about revealing to his fiancée Alice his experience of body integrity identity disorder—the existence of his left leg feels wrong, and the solution is “to get rid of it.” Frank, a plastic surgeon sexually attracted to patient Aggie in “Sum of her Parts,” is equivocal about his career, as well as whether he should perform the procedures Aggie seeks. Elizabeth, the protagonist of “Remission and Other Tragedies,” prepares for her impending death from cancer by hooking her husband up with another woman, until remission throws a wrench in the works:

I imagined what would happen after I told Ida that the plan was off—that she could step aside now because I was in remission and had many years left. I imagined her eyes bugging right out of her head, her lanky arms and legs turning into ropes wanting to strangle me, fire screaming from her mouth.

An unusual arranged marriage does occur in “Split Milk.” Aseem is a cab driver who struggles to adjust to his new position in the pecking order after leaving a life and lover behind in India to relocate to Toronto. When a privileged young woman named Beatrice dies as a result of an accident in his cab, her parents insist that to address his culpability, he must marry her older and chubbier sister, Laverne. Aseem struggles to balance his misgivings about the fatal incident and the ameliorative potential of gaining Canadian citizenship against his aversion to marrying someone he doesn’t know and to whom he is not attracted.

“Mrs. Barber, I’m sorry to have to tell you this, but I can’t marry your daughter. I feel terrible about what happened, but I just can’t.”

Mr. Barber spoke then like lightning that sizzled: “You owe it to us.”

Aseem, hit with Mr. Barber’s bluntness and buzzing with his own guilt, was forced to reconsider.

The storyline intentionally strains credulity, and articulates conflicting sensibilities likely to stir a reader’s reaction. On the one hand, Baggio provides a counterpoint to the usual exoticizing of people of colour; Aseem’s sense of the world is normalized and it is the late Beatrice’s rich, white parents who are represented as surreal and perverse. On the other, his new wife Laverne is presented in terms that relate almost solely to her body size, focusing on her physicality to the near exclusion of her identity—her “rippling arm flesh,” “large hips” and “heavy thighs.” Rather than speaking, she is said to have “blubbered” and even “burped” her words. These are clearly authorial decisions, but readers sensitive to our fat-shaming culture may still find them very hard to stomach.

An accident—not deadly but still life-changing—features centrally in the novella As She Was. And as in “Split Milk,” Baggio demonstrates a keen awareness of the impact of social and economic class in people’s lives. Thin and pretty Becky, the product of a teenaged liaison between Candy and Quinn, figures out how to be happy and fit in at school even though her home is ratty and her now-single mother regularly drinks to excess. She gets a job at The Gap and a hot new boyfriend, inciting her best friend’s jealousy. But both Becky’s body and her experience of the world are dramatically altered when she gets into a motorcycle accident that renders her physically and mentally disabled.

A complex story is recounted from every point of view but Becky’s—her struggling mother, the father who once abandoned her, her Gap manager, her best friend and her boyfriend who drove the motorcycle, drunk, on that fateful night. The story’s structure is unsettling: since we are not given direct access to Becky’s own thoughts either before or after the accident, the principal character feels at constant risk of objectification. She is still an active presence in the world but treated on some levels by those around her as if she no longer exists—as her best friend Enid puts it, “she’s gone.” But with a subtle and effective development culminating in the story’s final sentence, the character with the greatest level of denial about Becky’s new reality ultimately acknowledges her personhood.

The stories that make up In the Body share a number of recurring themes, including family tensions and domestic disturbances, the concept of survivor guilt and the use of dissociation as a strategy for surviving difficult situations. “With Daddy” is told from the point of view of Ashleigh, a young girl abducted by the title character. Her father wants Ashleigh back because he’s been hurt in his marital separation and feels entitled, not because it is best for her well being or he is adequately prepared to take care of her. Neither of those things is true. Ashleigh loves her father, but needs to reconcile that with the fact he’s locked her inside his car. Her imagination helps her cope; as she puts it, “sometimes I like to pretend that things aren’t really true, even if they are”:

I close my eyes and imagine that my body is no longer a little girl. I morph into a tiny butterfly that can fold itself to fit through the slit he’s left in the window.

The intermingling of love and objectification recurs in “Saving Katie,” in which a mother wishes she could force her daughter Katie, battling an eating disorder, to eat, to just get better. Parenting as a complex minefield also features in the powerful “Birthday Boy,” in which small-town Ohio couple Virginia and David have very different reactions to the news their 19-year-old son David is about to be drafted to fight in the Vietnam War. For Gilbert, himself a veteran, this is an opportunity to finally “make a man” out of the gentle, bookish boy. Virginia first considers shipping David off to Canada to avoid the draft but eventually opts for a more dramatic, and artfully revealed, solution.

Like most of our own bodies, In the Body demonstrates occasional irregularities. The novella As She Was suffers from a distracting continuity flaw. Becky’s boyfriend Chris initially tries to flee the city rather than face her in the aftermath of her accident. He gets drunk and passes out at the bus station and his bag—containing all his money—is stolen. Yet a handful of pages before, we read that Chris had put his clothes in his bag but kept his money in his pockets. And in “One Too Many,” Theo comes up with a plan of attack upon his unwanted leg that is described in a fashion that’s quite poetic but very hard to visualize. The reader stumbles over the choreography of his actions, struggling to picture what exactly the character is doing. But such tiny missteps are outweighed by the book’s ample strengths: complex characters facing unique predicaments in stories richly told. In the Body is a highly engaging book, in a manner at once cerebral and visceral.

Allison Baggio has had fiction and commentaries appear in a range of publications including Room, subTerrain, Today’s Parent and the Toronto Star. She is a graduate of York University and the Humber School for Writers, and author of the novel Girl in Shades (ECW Press, 2011)._

Shawn Syms has completed a short-fiction collection and is editor of the forthcoming anthology of social-media inspired literary fiction, Only Interconnect. His writing has appeared in over 50 publications including The Rumpus, The Collagist, Joyland, The Toronto Review of Books and The Journey Prize Stories 21.