In Their Arms by Thomas Moore 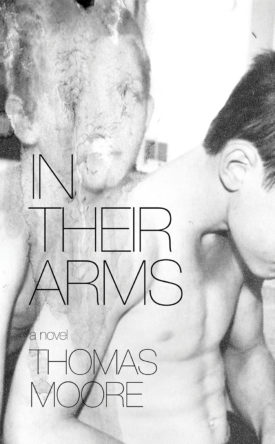 In Their Arms, the second novel by UK-born writer Thomas Moore, brings to mind the transgressive fiction of the late ’80s and early ’90s, when writers like Bret Easton Ellis and Dennis Cooper shocked the literary world with their cool nihilism and frank, often violent depictions of sex. Both Cooper and Ellis were among the literary enfant terribles of their time. Moore’s new novel hits all the depraved beats that made his literary forefathers infamous, but does it in a way that is both innovative and fresh. Moore has crafted a work of stunning melancholy, and suggests that technology—in its dizzying and relentless effort to connect people—has in fact created a kind of tactile ennui, that ultimately borders on neurosis.

The novel follows the static routines of a nameless, queer art critic as he numbly carves out a semblance of a life. The book’s narrative structure is vaguely experimental in nature, and built around a numbing cycle of events that include the narrator’s perusal of cruising apps, dark room visits, sex with strangers, and drug use. In Their Arms wholeheartedly dabbles in the Dennis Cooper world of the erotic queer narrative and with very little restraint. Bodies are objectified to dizzying and numbing levels. Sex acts are described in major detail but written in affectless, declarative sentences. At the novel’s beginning, we discover that the narrator has retreated from his former life and dived head first into a kind of spiraling Caligulan hell, where rampant sex with strangers is used to mask ambiguous emotional feelings. The opening of the book describes a scene in which the narrator wakes up in a dark room feeling tired, confused, and emotionally blank. The rest of the novel charts the narrator’s free fall into emotionally barren and hazy territory. As we follow the narrator from dark room to dark room, participating in sex acts with hypersexualized men, the world within the book begins to almost fall in on itself. Passages of the book become more fractured, the veneer of linearity disappears, the prose becomes a bit more muddled, and so on and so forth. After a while, the effect of reading In Their Arms becomes a dulling of the senses.

As is par for the course in the quasi-experimental mode Moore works in, there is very little plot to account for here. In Their Arms very heavily relies on style and its overarching experimental aesthetic to convey core themes of loneliness, desire, lust, nihilism—often through the lens of social media.

As the novel trudges forward in a Xanax-fueled haze, social media transcriptions begin to appear in the narrative. In fact, several pages of the novel are composed strictly of the detritus of friends’ tweets and Tumblr posts juxtaposed:

A gif of people dancing in the Daft Punk anime video.

A severed head from a horror film.

This stark juxtaposition makes for some of the more chilling and innovative parts of the novel, and only adds to the confusion and often dreamlike feel of the work. The narrator at one point comes to the realization that “…the internet is just a fog that won’t clear,” further working to cement the theme that the narrator’s ennui is reciprocated and mirrored by the digital space. In another social media transcription, the narrator thinks about the fundamentally endless cycle of the GIF format, and its place in prolonging a certain welcomed nostalgia. He goes so far as to imagine himself stuck in a GIF: “…trapped and ecstatic in the greatest moment that I’ve ever felt that I’ll be able to feel forever.”

The addition of the tweets and transcriptions of Tumblr images heightens the sense of dread that permeates the novel—creating a kind of terrible anxiety that doesn’t so much hit you over the head, but lies trembling just beneath the page. In many ways, In Their Arms is the perfect queer milieu piece for the digital age of internet hookups and casual nihilism; a Less than Zero or Frisk for modern times.

The dialogue throughout In Their Arms is tinged with subtle levels of dread. During one exchange with a random cruising hookup, the narrator’s partner makes a comment about whether he’s a top or bottom: “Sometimes I just top myself. Ha – sounds like I’m talking about suicide.” The book is full of these razor-sharp double entendres, packed with an underlying dread that adds to the overall “punched in the gut” feeling of the text.

As the hookups accrete and his work life begins to deteriorate, the narrator reflects on the malaise that ails him: “Life seems inescapable, mainly because I can’t say what I need to escape from; I don’t know. There are practical things that could be better and there are emotional states that I’d prefer to be a lot different but when I try and parse through each element objectively it’s hard to figure out what’s going wrong.” This rather existential thought provides no great realization for the narrator, however, and the novel ends with the nihilistic admission that “nothing matters.”

With In Their Arms, Thomas Moore gives us a voyeuristic tour of a spiraling gutter life that is neither gilded nor depraved—but of a life that just is. Neither a moralist or a satirist, Moore seeks to take us on a tour of a particular cultural milieu and leave the camera running, going places less brave writers would not dare go.

Thomas Moore’s work has appeared in various publications in Europe and America. His first novel, A Certain Kind of Light, was published by Rebel Satori Press. His novella, GRAVES, and two poetry collections, The Night Is An Empire and Skeleton Costumes, were published by Kiddiepunk. He lives in the UK.

Michael Browne is a writer and publicist based in Los Angeles. His work has recently appeared in Westwind and Entropy, and he is currently working on a debut chapbook. Michael also writes reviews for Angel City Review and can be found on Twitter here: @brownelaurence.