I Stole the Rain by Elisa Ruotolo 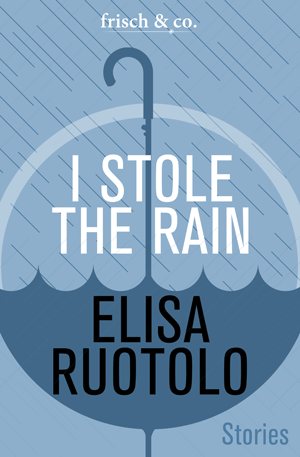 A failed soccer wunderkind, an anguished mother, and a love-thwarted bar owner are the central figures of the three longish narratives that make up Elisa Ruotolo’s splendid collection, I Stole the Rain. Lengthy though the stories might be, it matters little, as by the end of the book one feels as if a lifetime in stories has passed by in the blink of an eye. The prose is sharp, witty, and transcendent, and the characters remain long after the stories have been read and reread.

The opening story, “I am Super Legend” is a narrative of sweet sadness, a Don Quixote-like story of the soccer-mad boy, Super Legend, and his search for the big time. Set in a timeless place of boyhood dreams and paternal longing, the narrative explores the triangulated relationship between mother, father, and Super Legend.

There is a sense of homage to Calvino mixed into the narrative, as Super Legend tells the reader of the famed “Black Eagles” soccer team, and their efforts to vanquish their nemeses on the “Blind Falcons” team. Even after,

The bus had taken a turn badly and ended up at the side of the road, the bus lying on the side where the door was… They played without asking for special treatment, without making substitutions, without going into extra time, without a fuss. And they won.

Subsequently, a surprise illness to the Eagles’ striker, Gerard Schiavone, leads to Super Legend’s ascent to soccer greatness, albeit at a local level.

Ruotolo brings the reader into Super Legend’s heady ascent to local stardom and his first steps in the world of romance, but soon enough the slow, dismal descent into failure as he signs to play for a professional team. There, his weaknesses are exposed and Super Legend ends up the butt of his teammates’ jokes, at one juncture being admonished to perform plumbing duties on “a legendary turd clogging up the second toilet…”

By story’s end, Super Legend is married, working as a tobacconist, and raising a child not his own, with his love, Marcella. The dream persists, though, and in his own mind, Super Legend is, and will always remain a young boy yearning for the big league.

In the second story, “The Child Comes Home,” Ruotolo explores the repercussions of the disappearance of a woman’s nine-year-old son. The poignancy and pain of the mother’s loss infuses the story with a desperate sadness, a lasting sadness, one that transcends the years of the son’s absence, and infiltrates the woman’s attempt at a second chance as the lover of a jewelry maker.

The woman, a peddler of gold, finds herself at home, possibly followed by a stranger, and answers a knock on the door that causes her to ask,

“Who are you looking for? What do you want from me?” she asked and immediately regretted having shown suspicion and fear.

“It’s me…” replied the voice on the other side. “Me,” he repeated, but she couldn’t remember.

What promises to be a story of a son regained, fast becomes a chilling tale of criminal behavior and devious advantage taking. The mother longs to believe in:

The call of blood, that amongst thousands of faces that mean nothing and say nothing, a mother would always recognize and track down her son’s.

Instead she is tied and beaten, robbed of her gold and her hope. In this world of abandonment, there is an underlying sadness running through the sentences, a River Styx of regret and loss, and Ruotolo explores her themes with surety and conviction. The descent into the mother’s hopeless waiting for her son to come home takes the reader to the riverbank of such a palpable loss.

The final story in the book, “Look at Me,” is a tour-de-force, an examination of family, love, and memory seen through the eyes of a bar owner whose own marriage is one of convenience, lacking in the love he so desperately craves. The narrator weaves the tale of his own father and how he assisted a family friend, Cesare, in his quest for a wife.

The underlying sense of how the world shapes one’s destiny, and the seemingly unchangeable manner in which one’s lot in life is determined are what drives this narrative along its winding, circuitous paths to the closing moments where the narrator is surrounded by fallen leaves, and says,

I don’t know what came over me or whether he had heard me from the cornice which held his life in the balance but I swore to him that I wouldn’t let the autumn go by this time too, that I would deal with it.

In this final moment, the narrator is trapped in a Beckett-like state, pondering the vicissitudes of life, and says, “I would do anything, as soon as I had understood what I needed to do.”

Ruotolo’s examination of her characters’ lives takes place almost my accident. The three stories that make up the collection are not driven by plot, but rather unfold as one might watch a family’s drama through a kitchen window on a dark night. These are stories of small moments, subtle movements, and inconsequential meanderings in the lives of ever-so-ordinary people. Her writing is fluid and clear, complementing perfectly the focus of her writer’s eyes.

Elisa Ruotolo has published several short stories and teaches Classics. I Stole the Rain is her first book.

With an MA in Translation and Interpreting, Lisa McCreadie works as a translator from French, Spanish and Italian and is also currently learning Norwegian. She considers herself to be a protégée of the BCLT, having attended Summer School in 2012 and won its 2013 Italian Mentorship under eminent translator Howard Curtis. I Stole the Rain was Lisa’s first commission in collaboration with e-publisher Frisch & Co.

James Claffey hails from County Westmeath, Ireland, and lives on an avocado ranch in Carpinteria, CA, with his wife, the writer and artist, Maureen Foley, their daughter, Maisie, and an Australian cattle-dog, Rua. He has a son, Simon, who lives with his mom in San Diego. He is the author of the story collection, Blood a Cold Blue (Press 53).