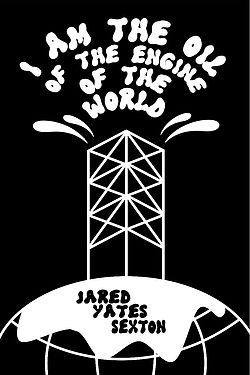 A quick perusal of Jared Yates Sexton’s previous collections prompts one to consider the work of such distinguished American realists as Richard Ford or Raymond Carver, names that by this point serve as shorthand for a particular kind of story: one that centers on the adversities of a certain kind of down-and-out everyman. To Sexton’s credit, the stories in these collections never read like simple reproductions; the language is never as clipped nor the outlooks as hopeless. Tonally, he seems to be writing from a different generational viewpoint, and such an assessment is clearly evident when reading the twenty-five stories that comprise his newest collection, I Am the Oil of the Engine of the World. While the realist trademarks from his earlier work remain, Sexton’s third book is much more satirical, taking aim at contemporary society’s obsession with fame, technology, and religion. The results will, for some, call to mind names like Vonnegut or George Saunders, but these stories are uniquely Sexton’s, who shows a greater sense of versatility in what might be his greatest collection to date.

At several points throughout the collection, Sexton adopts a sardonic tone, and one of the best examples comes in the penultimate story, “The Moment Before the Earth Was Destroyed.” In the first line readers are introduced to something previously unseen in Sexton’s work: aliens. They’ve descended to Earth and are in search of a quick tour before obliterating the planet. They find themselves in Houston with their tour guide, the aptly-named Tex. Tex doesn’t have much clue about the intricacies of war, culture, art, or literature, but when asked about the relative ease of a self-opening car door, Tex is happy to explain its function:

And with that, the aliens trigger what they’ve set out to accomplish, and the story ends. It’s easy to chuckle at the interaction or the suggested stupidity of the Texas everyman, but replace Tex with any other unenlightened twenty-first century American, and the destruction of mankind is still imminent. Mankind has reached a point where only “utility” is valued, and the reasons for battle, for art, and for expression have been misunderstood or lost altogether. Mankind doesn’t need aliens descending to Earth to destroy the world, Sexton might argue; rather, mankind has already begun the process.

“The American Experiment is over,” one of Sexton’s characters utters midway through I Am the Oil of the Engine of the World, the phrase encapsulating so much of the collection since many of its characters seem to have abandoned the idea of legitimate hard work for an attempt at some kind of easily-found sense of triumph. “New and Better Things” begins with the news of a serial killer with a fondness for blue-eyed, red-haired young women who jog alone, and once the Briar Patch Killer accumulates a few victims, his popularity soars and he becomes a bit of a celebrity, even appearing as a guest on a nationally-aired talent show. His appearance—revealed for the first time—leaves much to be desired, however, and soon the attention paid to the killer wanes, and many citizens’ lives retreat back to dreaded normalcy. The narrator and his wife (who happens to have blue eyes and red hair) find themselves in search of some way of enlivening themselves, the wife even going so far to court the killer by frequenting the sort of spots he might be found:

My wife, my lovely red-curled wife, went on long walks, wore hardly a stitch on her, and when she returned, close to three or four in the morning, her face was streaked with spent tears and run mascara.

I held her. I spoke into her ear. I twirled my finger in her red hair. In truth, I was restless myself, tired of our love, tired of her loveliness, tired of waiting on the killer to emerge, tired of having to reaffirm that she was beautiful… and tired of everyday complacency. Someday, I said to her, to my wife. Someday you and the killer will cross paths.

The story ends with the news that the Briar Patch Killer has reemerged. In the middle of the night the narrator scrambles to help his wife dress in jogging apparel, their hope—distorted as it may seem—to gain notoriety as the latest victim, stepping into the limelight of American culture in the process. The decision would seem to suggest something of America’s obsession with celebrity and fame: the spotlight, no matter how one comes to find oneself in it, is far greater than living a life in obscurity.

Reality, then, is simply a disappointment one seeks to escape. Escape and the potential for reinvention—perhaps the very first American ideals—factor heavily through Sexton’s collection. “Habit Yourself to the Dazzle of the Light,” very much a Vonnegut-like story, invents a sort-of virtual reality world called The Fog, where Valerie can imagine her husband Rich as he once appeared, a statuesque twenty-six-year-old. The only problem, in the midst of the constant ecstatic sex that can take place anywhere in the world, is the unnatural glow emanating around him. FogCo has promised an upgrade to the system in three days, but this doesn’t satisfy Valerie at all:

She and Rich could dance their way around the world and back, travel through the artificial stars and galaxies, live entire lives and conquer dreams and empires, in what roughly amounted to a half hour in real existence. To wait another three days for a fix to her problem was akin to receiving a life sentence in Purgatory.

Back in the world of their living room, she views Rich asleep on the couch in his undershirt, the house quiet:

She went to the window and gazed outside at the empty streets and all of the surrounding houses, dark and seemingly abandoned. The world looked deserted except for the sad-sack moon hanging overhead among a sky devoid of stars. The air below sizzled with budding advertisements—smell apps, taste apps, skin apps, travel apps, emotion apps and inspiration apps—that appeared and disappeared as random as neon ghosts…. Three days, Valerie told herself, returning to the couch to wait.

Sexton paints a dire picture of the American household here, one seemingly past the point where escape and reinvention are worthwhile ambitions. Much like the husband and wife in “New and Better Things,” Valerie and Rich seek something beyond the realm of what they’re capable of getting, and all they receive in return is disappointment.

Jared Yates Sexton has written a collection of stories that is of its time. It paints contemporary America as a flawed society, one beset by the lack of free will, intelligence, and a respect for the self, the environment, and culture at large. I Am the Oil of the Engine of the World succeeds not only because its author challenges his own aesthetics but because the book dares to examine the maladies of this contemporary era with honesty and a bit of humor; the results are, at times, unsettling but always exceptional.

Jared Yates Sexton (jysexton.com) was born and raised in Southern Indiana and received his MFA from Southern Illinois in 2008. He’s the author of three collections, a crime-novel, and works as a political correspondent and Assistant Professor of Creative Writing at Georgia Southern University.

Brian Seemann’s fiction appears or is forthcoming in Bull, REAL, and Mojave River Review, among other journals, and has been anthologized in Home of the Brave: Somewhere in the Sand (Press 53) and The Mix Tape: A Flash Fiction Anthology (Flash Forward Press). He currently lives and teaches in Colorado.