How to Shake the Other Man by Derek Palacio 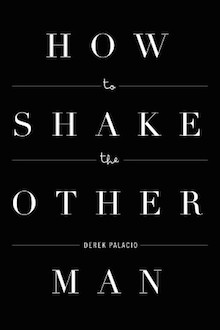 The title of Derek Palacio’s novella suggests a desire to rid oneself of a potential foe, and considering how much the novella concerns itself with boxing and the bond between an untested fighter and his trainer, How to Shake the Other Man seems an apt title for Palacio’s debut. However, the story of a young Dominican coming to terms with the death of his lover as he prepares for his first fight reveals implications far beyond boxing, primarily that of how a young man must come to terms with who he is and who he wants to be. While Javi, Palacio’s captivating protagonist, must ultimately elude the punches of another boxer inside the ring, before that, he must shake away the person he has been while also becoming the man those closest to him believe he is capable of being.

In the first pages of How to Shake the Other Man, readers learn of the murder of Javi’s lover, Marcel, and discover that Marcel’s brother, Oscar, has taken Javi under his tutelage at his gym. Despite his love for boxing and the promise he made to his brother, Oscar doesn’t want Javi to fight; the boy is restless and burns up his energy too quickly, and Oscar’s afraid that Javi won’t be able to manage for long inside the ring. Unbeknownst to Oscar, Javi doesn’t really want to fight either. Instead, readers find that “Javi doesn’t want to dance anymore. He wants to run.” Now that Marcel’s been murdered, Javi wants to escape New York City and the world he’s become a part of since his family immigrated, but like Oscar, he’s conflicted by the promises he’s made in the past to Marcel.

Marcel’s relationship to both Oscar and Javi comes through backstory, and each scene is captured wonderfully by Palacio. Marcel is honey-voiced and loquacious, a Cuban businessman and owner of thirty-two New York City street coffee vendors. Upon meeting Javi, Marcel ushers Javi into a life in which he appears more comfortable; rather than suffer the condemnation of his father for being homosexual, Javi embraces the opportunities Marcel can provide him. In perhaps one of Palacio’s most impressive lines, he writes that, “Javi knew Marcel was teaching him how to stay, tethering him to a stubborn heart.” For a young, energetic man disinclined to live a sheltered life with his father, Javi sees Marcel as a foundation, and perhaps this is why, after Marcel’s murder, Javi forces himself to continue training. It’s easy to run from one’s problems, but there’s far more respect and dignity in shaking away the past in order to find a better future.

Javi appears to arrive at this conclusion as the novella comes to a close, and after an encounter with a man propositioning him for sex that briefly unsettles him, Javi emerges for his fight after all, somewhat to Oscar’s surprise. Palacio’s ending provides the sort of resolution any strong literary piece demands; it offers an external culmination of events while also continuing to plunge into the internal conflicts of character, and as Javi moves inside the ring, another boxer in front of him, Palacio writes: “Oscar’s told him to run, but now Javi thinks otherwise.” The fighter maintains his position, as strong outside as he is inside.

Derek Palacio was born in Evanston, IL, in 1982 but grew up in Greenland, NH. He holds an MFA in Creative Writing from Ohio State University. His work has appeared in Puerto del Sol and The Kenyon Review, and his story “Sugarcane,” was selected for inclusion in The O. Henry Prize Stories 2013. He is the co-director, with Claire Vaye Watkins, of the Mojave School, a non-profit creative writing workshop for teenagers in rural Nevada. Currently, he lives and teaches in Lewisburg, PA, where he is completing a novel about a small Cuban family struggling to remain whole after fleeing the island as part of the 1980 Mariel Boatlift. He is also working on a collection of short stories relating to Cuba’s past, present and future.