Foucault, in Winter, in the Linnaeus Garden by Michael Joyce 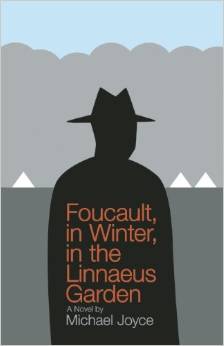 There is, in most book reviewing guidelines, a rather strong feeling against playing games of “what if,” as in, this novel could have been good (or great) if. Writing about what a book “could have been” is seen as usurping the work of the novelist, in a sense, encroaching on the realm of the imaginative. Leave that to the artist; focus on what is evident. There is no room in a book review, in short, for regret.

Every once in a while, though, a book comes along that drips what people tend to call “potential.” In these cases it becomes the reviewer’s job to point out the germinating seeds of genius. In the case of Michael Joyce’s latest novel, Foucault, in Winter, in the Linnaeus Garden, some of this kind of criticism must be done.

Foucault, in Winter is an epistolary novel—mostly, and it is this little “mostly” that produces the frustrating draw towards the regretful book review. The novel depicts a few freezing cold months that the French philosopher and activist Michel Foucault spent in Uppsala, Sweden, giving lectures at the University while conducting research for the book that would become his History of Madness. In Joyce’s fictional account of this real period, Foucault meets a young Swedish woman, Gabrielle, who is, in turns, intriguing, seductive, and anathema to the archaeologist, and the development of their tumultuous friendship provides most of the novel’s narrative fireworks. A fantastical figure, Gabrielle is for Foucault an impossible ideal: she is the image of liberation in madness, the embodiment of the sort of alternate epistemology that so fascinated Foucault as a philosopher and as a man. Indeed, Foucault writes in a letter to a colleague, Jacqueline—whom he refers to as his mother, confusingly enough for readers not versed in the trivia of Foucault’s intellectual biography—that he worries that he may have “created her from [his] own imagination (I do not say delusion).” As the novel unfolds, and more details about Gabrielle’s life are revealed—her strange love affair with a bullied soldier, her adventurous past in Brazil—she pushes back against Foucault’s tendency towards reading her as he would an archival text. In this way Gabrielle emerges as the closest thing to a hero that the novel has, as she carves out a space in the narrative for herself beyond a kind of intellectually fetishized Manic Pixie Dream Girl.

Foucault’s growing interest in Gabrielle is set against the rapid disintegration of his relationship with Jean Barraqué, his lover, a composer whom he left behind in Paris. Many of the letters that make up the text are penned by Foucault and addressed to Jean, whom he misses desperately. His attitude towards Jean shifts throughout the novel from one of pure longing—“Oh won’t you come here, now as I write, et nous allons prendre l’avion”—into something more complex, as Jean drifts farther and farther away through his absence. Jean is absent not only from Foucault’s life but from Foucault, in Winter: we do not get a single letter from him: he never responds. Many of the later letters to Jean are extremely affecting, and the passion that is behind them makes Foucault’s—and, by extension, Foucault’s—sometimes absurdly bombastic stylistics both more palatable and less absurd.

Most of the over-the-top flair of the style comes from the complex “mixed language,” as the author terms it, in which the novel is written. There is enough French in Foucault, in Winter that it would be slightly wrong really to call it an English language book—and there is a healthy smattering of Swedish and Latin thrown in there as well. Foucault and his correspondents constantly jump between English and French mid-sentence, often mid-clause. How readable this mix is depends on how large your French and Swedish vocabulary is: mine is limited. (A side-effect of the polyglot text: I felt my French go from definitely useless to slightly less useless, and my Swedish go from essentially nonexistent to at least negligibly embryonic). That said, Joyce is probably correct in writing, in his introduction to the novel, that even with extremely limited linguistic flexibility, most readers shouldn’t miss much of what “happens” in the book; the plot remains almost entirely legible. The problem, obviously, is that what “happens” in the novel—as is the case with many novels—is hardly the most important thing.

When the mixed language works, however, it really works, and can produce some lovely effects, especially in terms of how sentences sound. On discovering that Gabrielle is “practically a neighbor,” for example, Foucault waxes polyglossaic on their nearness: “mais que tu habites à une telle proximité que even in a fog, dans le brouillard, one could find one’s way to you, or you to me.” Even if one doesn’t know that “dans le brouillard,” means “in a fog”—as I didn’t, initially—the rhythm of the sentence gains something from the presence of that multilingual repetition. As the paragraph goes on, though, and Foucault tumbles off into quoting Isaiah in the Vulgate—one can feel that enough is enough. When the multilingualism mixes aggressively with quotation, there can be a bit too much “cleverness” about this vision of Foucault. And the language stays just about the same throughout the novel—it doesn’t even switch much between the different authors of the letters: a tiring fact—in a way that masks the deterioration of the philosopher’s mental state. Towards the end of the novel, then, when Foucault, almost completely submerged into the manic thrall of his passion, exhibits a sudden awareness of the insanity of his preferred form of speech and writing—“Is there any language madder than this, le tissage alambiqué de l’érudit, as convoluted as the whorls of the brain itself”—the reader can’t help but wonder what took the philosopher so long to reach this particular stage of self knowledge.

All of this being the case, then, when the novel, in its last twenty or so pages, drops the epistolary model and suddenly morphs into a rather conservative realist form of storytelling—dropping the all-encompassing stylistic conceit of multilingualism in the process, and settling into a comfortable English—the reader gets quite a shock. But the shock is, in a way, the shock of relief: the novel improves markedly in these last few sections. The pace quickens, the language—freed of its gangly polyglot extremities—tightens and grows more impactful: one suddenly cares a lot more what happens to Foucault, to Gabrielle, and to Jean.

And this is where the feeling of regret sets in. It is difficult not to wonder what Foucault, in Winter, in the Linnaeus Garden could have looked like had more of the novel read like its conclusion, a phantasmagoric burst of action and feeling that the remainder of the novel only sort of gesticulates towards obliquely. If any novel can withstand the speculative intrusion of a critic, though, it is this one, which its author describes in his introduction as “an imaginary history that is at least doubly fictional: an imagined imagined life.” There remains space, I think, for Foucault’s imaginary history to be imagined otherwise.

Michael Joyce is the author of eleven books in a career as a writer in several genres – poet, critic, and collaborative multimedia artist. Joyce is best known as the author of Afternoon, which The New York Times called “the granddaddy of hypertext fictions.” Recent work includes poetry and translations published in Fence, Iowa Review, Spoon River Review, Notre Dame Review, and elsewhere. Joyce lives along the Hudson River just south of Poughkeepsie, where he is Professor of English and Media Studies at Vassar College.

Walter Gordon is a writer and bookseller from Berkeley, CA, who now lives in Brooklyn.