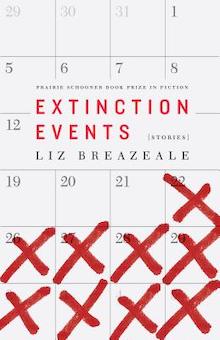 Erosion is “the study of disappearing,” explains the narrator of the first story in Liz Breazeale’s collection Extinction Events. Brimming with maps of imaginary places and lost cities, and natural disasters in the form of volcanic eruptions and impact craters, Breazeale’s stories explore extinction in all its possible forms, from the disappearance of the dinosaurs and the course of human plagues to the death of a single beloved sister.

The opening story “Un-Discovered Islands” sets an elegiac tone. The narrator, the erosion specialist mentioned above, watches with her husband and daughter as the world’s islands begin to disappear. At first, the reader can interpret these events as a plausible result of sea-level rise. Then larger islands begin to disappear at an accelerated pace: Easter Island, then Hawaii, Indonesia, and Ireland. As larger and larger land masses are “un-discovered,” the narrator and her family understand that they too will be involved in this inevitable process of extinction. Meanwhile, TV pundits argue about the nature of their changing reality. “It begs the question,” one of them asks after the disappearance of Hawaii, “whether any of these places are real. Have they even existed?” The story functions as a spot-on indictment of climate change and our own inability to grasp the extent of the unfolding disaster.

Yet for the narrator, the turn of events feels strangely familiar as well. Her husband remains in denial, unable to accept “a new normal where terror is now suddenly real because men feel it too.” Women, Breazeale suggests, are more accustomed to the process of disappearing than men:

I have a sense of vertigo, not with height but with time, standing on the verge of myself at this moment, gazing at all the other moments that have come before, unable to pick out the strata of them, the moments of my life and who I was before now; they are all too molten, too volcanic. Who I was before my college boyfriend fucked me so painfully I gave him blowjobs so I would not have to sleep with him, who I was before I had this child, who I was before my husband, before the maternity leave left me frustrated and empty.

This passage is representative both of Breazeale’s style and the thematic resonances that sound throughout the collection. Her sentences seamlessly combine the language of geology with that of personal feeling, tying the dynamism of the earth and its landscapes to the shifting nature of human actions and emotions.

The specter of climate change hovers over these stories as a function of the collection’s title and the times we live in, but the rest of the stories turn more to the past for inspiration than to humanity’s doubtful future. In “How Cities Are Lost,” a young woman travels to the world’s famous ruins like Angkor Wat and Mohenjo-Daro, following in the footsteps of her mother; both of them were born in a town where women of childbearing age are believed to be afflicted with an illness that causes them to desert their families. In “The Devil’s Tooth Museum” the narrator attempts to revive a museum in the desert of Arizona built over an impact crater on land that has been owned by her family for generations, but her real interest lies not in the crater or the possible extinctions it might have caused, but in preserving the memory of her dead sister.

One standout story is “The Lemurians,” in which an older sister grows up protecting her artistic brother from his bullies, but the two still end up as estranged young adults. When the narrator comes to the gallery opening for her brother’s first art show, she recognizes his drawings as descendants of the ones he did as a child of a mythical land called Lemuria, but something has gone wrong: “there was no love, no hope in these Lemurians, no longing in their seashell creations. They were monstrous, murky and shadowed, hemorrhaging sand.” As in the other tales here, the metaphorical core of meaning is there — the mythical land of childhood, turned to ruins — but the story finds its most believable pathos in the casual way that the brother turns away from his sister, snubbing her in favor of his boyfriend and artsy friends.

Extinction Events won the Prairie Schooner Book Prize in Fiction, and it’s not hard to see why. All of these stories are beautifully wrought, setting out their aesthetic terms with a striking confidence. The stories also cohere with one another in an impressive way, wide ranging in geography and history, but also turning around the same set of preoccupations with natural disasters and geologic processes working as both cause of and metaphor for death. If there is a limitation here, it may be that the stories hold together almost too well, so that the different volcanic eruptions and lost cities threaten to run together. This is a thin volume, but one best savored slowly, with time to let each story ripen into fullness.

This might sound like a grim collection, each entry reminding us of the inevitable extinction of ourselves and our loved ones, but this is far from the case. Breazeale’s style communicates a consistent sense of awe in the face of the wonders of the natural world. In “The Disaster Preparedness Handbook,” Brooke, who survived a tornado as a child that destroyed her family home, struggles to communicate the experience to her husband, to describe “the gut-deep wonder that had been feeding off her fear until there was none left, until she was only wind, too, until she was all vacuum and pressure.” Throughout this beautiful collection, Breazeale challenges us to marvel at the raw powers of the Earth, even as they threaten to destroy us.

Liz Breazeale is a technical communications editor for the National Renewable Energy Laboratory in Golden, Colorado. Her stories have appeared in numerous publications, including Pleiades, Sou’wester, Territory, Arroyo Literary Review, and Fence.

Kat Solomon lives in the Boston area. Her short fiction has appeared in Monkeybicycle, Juked, Cosmonauts Avenue, and the New Orleans Review.