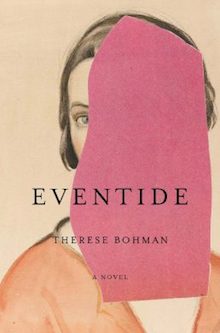 Eventide: the title in English of this excellent third novel by Swedish author Therese Bohman is literary, poetic, old-fashioned. It carries an echo of the hymn tune of that name (associated with the hymn of longing Abide with me), perhaps paralleling the reference in the original to Pär Lagerkvist’s Aftonland (set to music by Arne Nordheim). One could also think of Millet’s painting of the Angelus — that moment of pause from the day’s labours, of prayer and reflection. The cover offers a different approach, however: an adaptation of a 1928 portrait of a woman (by Danish artist Gerda Wegener) whose face and neck are hidden behind a cool, pink shape, leaving visible one eye that surveys the reader.

Past the two epigraphs — one from Dante’s Inferno (on being lost midway through life) and one from a Swedish popular song (on being organized) — and the reader arrives in Stockholm, at the end of August, in the hot sweaty subway with Karolina Andersson on her way to university before the start of term. Her office, her colleagues, a PhD student and the summer’s activities are swiftly introduced. The text is narrated by Karolina herself, in a stream-of-consciousness flow that allows rapid changes of topic, tone, opinions and comment. Very often contrasting vocabulary within one sentence hints at instability: “It was a cheerful email, but at the same time Karolina couldn’t help feeling annoyed.” “How could the location for something so beautiful have such an ugly form?”

The reader shares Karolina’s life for around two months starting just before the beginning of the university year — a time of renewal and optimism, when lives might be changed. Karolina has spent the summer moving into a new apartment, having split up from her partner of 11 years Karl Johan. She knows she has let herself go — sleeping late, surfing social media, drinking; before there had been “a plan for the day, and even if it lacked any deeper meaning, it had still formed a framework on which to hang her life.” “She had quickly grown accustomed to the pitying looks that said, ‘Women in their forties don’t dump their partner. You’ve really made a mess of things now.’” The new term offers a new beginning: she is happy in her office, she has a kind of superficial order in her new flat. And yet …

Karolina is a fragile construct of her own making. The nameplate on her door “Karolina Andersson, Professor of Art” gives her something to live up to (“but she wasn’t there yet”). It is a label for how others see her. Some others: her parents, doubtless, her former lover, her colleagues and the editor of the journal to which she contributes. The fact that she feels she must live up to this label accounts for much of her anxiety and self-criticism but at the same time she resents having put this academic career first as she questions the meaning of her life: single, childless, middle aged.

Feminism has done a good job there, she thought, albeit unconsciously and with the aim of achieving the polar opposite: in this most secular and liberated age, it has created fresh taboos that she enjoyed using as the basis for her fantasies. She wanted to give her body to men who definitely didn’t deserve her mind.

She is a fascinatingly complex character who may appear weak, scattered and annoyingly unfocused at first but increasingly sympathetic as her insecurities are explained. In this time of crisis (perhaps one of many?) she raises universal questions: understanding time, the existence of God, justice in society, self-sacrifice, politics, art, comfort, happiness, sex, appearance, order. She is strangely out of step with contemporary theories, for example about teaching art thematically rather than chronologically. She rejects giving equal value to all expressions of culture: tv soaps and crocheted potholders are not as good as the best novels, paintings, architecture, she feels.

… the knowledge, the art, the culture, the tradition. The values she loved with a pathos and a conviction that she knew was old-fashioned, maybe even inappropriate. But if they could do for someone else what they had done for her, then she intended to hold on to them, in the best-case scenario to give them away like a key to someone who needed it, just as she had done, a key that would open up the world, make it seem clear and manageable when all its contents and connections made sense.

Two other female characters have their place in the narrative. Ebba Ellis is a Swedish artist (fictional) around whose work doctoral student Anton hopes to construct a ground-breaking thesis. Karolina is initially troubled by the fact that she has not come across Ebba’s work but decides that she could have been unknown for various reasons:

history was full of dead ends, artists who had never fulfilled their true potential, especially women, for crass reasons such as children and family life. Or because the artist in question was outside the social and professional context of the day, wasn’t part of a network, never had any pupils or followers (9).

Both are interesting comments on feminism.

Karolina’s own research has led to an interest in animals in art at the end of the 19^th^ century, particularly in apes which represented not only sexuality but the animalistic side of humanity, the side which was dark, suppressed, unknown, uncivilized.

The ape cut through all the relevant questions that could be considered in a university today: gender and class and ethnicity and sexuality; it existed in a terrifying no-man’s-land between the classification of animal and human, nature and culture, civilization and decadence.

The second woman in the narrative is G, whom Karolina calls Gavriila: a volunteer who took part in a human-ape hybridization project in Soviet Russia in the 1920s.Karolina is fascinated by the project which she finds revolting

These backstories are woven into Karolina’s life alongside flashbacks to rendezvous with former lovers, actual sexual encounters (Hans, Anton, Anders, almost Robban), side links to the Lisbon earthquake of 1775 and the Svalbard seedbank, teaching and mentoring assignments, mostly told by Karolina. Dialogue (rare) is sharp, significant. Karolina somewhat dramatizes her despair, her craving for the comfort and shelter of childhood, the longing to belong to a system, a need to be wanted. There are two sides to her brain, she understands: one was brooding on the fact that she was a failure but the other part then took over. “It had no time for self-pity but twisted and turned the situation, like a Rubik’s Cube, trying to be rational.”

It wasn’t fair. What was the point of the feminist struggle, she thought, as long as the biology stayed the same? … Surely biology couldn’t get the better of her, when she had read so many books? Now everything she had achieved seemed utterly meaningless. Like diversionary tactics that hadn’t worked.

But she does find a way.

Eventide is all about Karolina. Her narrative (rather than a plot) follows thoughts as one can follow computer links from one topic to another or her journeys through Stockholm on a city map, never knowing what the next page might bring. Some readers may be impatient with these meanders through the consciousness of a woman intellectual in mid-life crisis but many others, instinctively understanding her complex character, will actively cheer her on.

Therese Bohman is a columnist for Expressen, writing about literature, art, culture, and fashion. Her debut novel Drowned was published by Other Press in 2012. She lives in Sweden.

Marlaine Delargy has translated novels by John Ajvide Lindqvist, Kristina Ohlsson, and Helene Tursten, as well as The Unit by Ninni Holmqvist (Other Press) and Therese Bohman’s Drowned (Other Press). She lives in England.