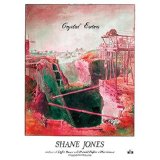 Shane Jones’s Crystal Eaters is a massive landscape painting of another world, which halfway through completion is dumped over with a bucket of hot water, leaving the particles to run. The village Jones creates is threatened with displacement by the city which will replace it. At the end, they are running up the canvas to: save mom, survive, be remembered.

Crystal Eaters is many things at once. It is a family saga without bloat, for a readership that believes more in the power of ambiance than dialogue. It is an anti-pastoral. It is maybe an allegory: for death, for endings. The book centers around a teenage girl, Remy, and her family, simply named Mom and Dad, with the family dogs and an imprisoned brother Adam on the periphery. Remy is obsessed with the book’s guiding premise of the crystal count. In Jones’s fictional world, you start with a hundred, and when bad things happen to you the number depletes, until you hit zero. Zero is death. Mom faces death.

The structure of the book mirrors this idea. Chapters go down in number from 40 to 0, and the page numbers are also descending. The disintegration of life is fully present here, not in a gloomy sense but in a more sickly radiant sense. As her count decreases, Mom vomits up red crystal slush, of which my mental image matched the book’s cover. Everyone in the book is trying to find a way to deal with decay on their own terms. Adam, A.K.A. Pants McDonovan, is in prison for activist demonstrations in the city and for advocating the artificial increase of the crystal count, which may or may not work. While incarcerated, Adam consumes the mysterious black crystals he has proven the existence of for an out-of-body drug experience. Remy is sympathetic to her brother, because he is trying to do something, and both of them refuse to see Mom die. In contrast, Dad is reserved to the fact in contemplative depression, for death is a part of life.

Things start to get real when a crystal-worshipping cult, the Brothers Feast, try to free Pants McDonovan, who is the leader of the Sky Father Gang. They exchange prison letters with Pants, and they come up with the idea of “a prison-break in reverse.” However, no one knows exactly how to define it. Pants helps, with arrows sending the Brothers into the prison and himself out of the prison. But that’s the extent to which it admittedly makes sense, similar to the heat wave threatening the heat death of the universe, as well as the impossible rate of expansion of the city. A lesser writer would explain these ideas away or relegate them to simple AB metaphor, but Jones knows how to put them in the reader’s head as the book’s own self-contained theological mystery. As for speculation as to a concrete meaning in Crystal Eaters, is it global warming? Is this the war on drugs? The war on dissent? Jones doesn’t make things even that “simple,” opting to make these floating possibilities the backdrop for what, at its core, is a heart-wrenching story of family grief.

Many fabulists use their fantasy as only allegory, to tease people into engaging with difficult, personal material. Jones is different, because his writing is actually rawer than most writers of realism. You can feel in his debut, Light Boxes, the desperation and self-immolation of a young 20-something writer without all the sap. He is a Brautigan for the Tao Lin generation. Now, with Crystal Eaters, we are faced with something very different. A somewhat older Jones is dealing with something we all stuff deep inside us every day: the finite. However, Remy and Adam want to, must, believe that Mom is infinite.

Between the cosmic and the personal are Adam’s black crystals. What do they mean? In one of the spurts of text which exists outside the confines of the chapter structure and the rest of the narrative’s point of view, Jones writes:

The sun wants to swallow the earth not for reasons of expansion, but attraction to the black crystals. The universe will not miss the earth. There are billions of planets. The black crystals reach for the sun in a moving spider web, coming up from the earth’s center, ready to break through all dirt, rock, grass, and bone.

The best magical realism operates both as personal cosmology and authentic emotion. And that is exactly how Crystal Eaters works. In a scene that is true to the life of euthanasia debates, Remy and Dad have a telling encounter when Dad comes to tell Remy Mom has one crystal left:

Dad enters Remy’s room and says Mom has one remaining. He tells her to leave her alone because something has happened to her mouth. Remy sits atop a mountain of pillows on her bed. She’s drawn pictures of black crystals all over the walls and ceiling. Where the red crystal once was, with the baby inside, has been blackened in scramble.

“We should just go.”

“Why? Because of the fence? Because of Adam? Sorry. Actually, I’m not. I don’t think there’s anything in this world that can’t be said. Just because we’re different from them doesn’t mean we’re bad. It doesn’t mean we can’t try to save her. They are coming in anyways.”

“It doesn’t matter where we go because you can’t reverse what is happening to her.”

“You see everything as dying.”

I don’t think there’s anything in this world that can’t be said, Jones writes through Remy. Even if the city folk don’t believe Remy and Dad when they are scrambling, looking for the hospital and doing their crystal talk, it doesn’t matter. It doesn’t matter that the ending is personal or opaque, because it means something and both the writer and reader sense it means something. That is the magic, and Jones is the magician. There are parts of the book that made me want to bellow with the deep sadness and struggle for expression that marks Jones’s themes and words.

Mom has to live forever, as Remy and Adam say, even if she doesn’t. No one’s ever does, yet we have to, and do, live on. With this novel’s triumphant conclusion, Jones gives us something to live by.

Shane Jones is also the author of Light Boxes, originally published by Publishing Genius Press in a print run of 500 copies in 2009. The novel was reviewed widely, the film optioned by Spike Jonze, and the book was reprinted by Penguin. Light Boxes has been translated into eight languages and was named an NPR best book of the year. Jones is also the author of Daniel Fights a Hurricane and The Failure Six.

Rory Fleming is a writer and law student living in North Carolina, where he has spent much of his life. His previous work can be found in places such as The Fiddleback, Metazen, and Gone Lawn. He was recently nominated by Bartleby Snopes for the Pushcart Prize.