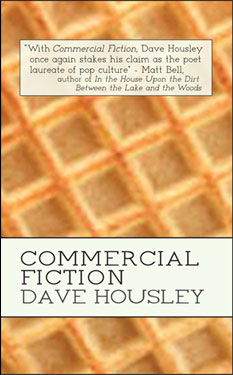 Commercials are affect-quicksand, emotion-riptides. They grab, they pull, and—even when you think that you are free of them—they do not leave. Commercials sit like bits of food inside the crevices of our cultural molars: they are in us, and they do not dislodge so easily. “More Ovaltine please” means something, it tells us something about who we are as a culture. Ditto “Where’s the Beef?” Ditto the slow, graceful flight of the mallet in Apple’s “1984” commercial. These are our modern myths.

Myths are old, and their making is in our blood. National myths used to come to us in the form of epic poetry: Gilgamesh, the Illiad, the Aeneid, the Faerie Queen, Paradise Lost. But that epic voice died out sometime around the early 19th century when Keats dared, in The Fall of Hyperion: A Dream, to turn “a God into a shaking palsy.” The Gods, of course, always were shakings palsies, just old men with their flaccid thunderbolts.

For Housley, commercials have become the mythic ur-texts, and he takes up the poetic task of their undoing—their reimagining, the peakings-under-their-skin. He, like Keats, takes these mythic people, these every(wo)men of commercials, and unveils the shaking palsies that they always already were. As he says in “Cialis,” the collection’s opening story:

Confidence can get you sitting out on the lawn of a five star resort in a lukewarm tub waiting for an erection that may or may not come.

How’s that for a shaking palsy? And Housley is well aware of this history of God-unveiling: he ends his collection with a reimagining of the lives of two characters already well reimagined: Rosencrantz and Guildenstern.

But instead of epic length, these stories give us the epic scope of interiority, the wracking power of the unknown detail: who knew of the marriage counselor haunting the “Wranglers” commercial? Or the tristful poignancy of this meeting, from “Budweiser,” between a tax preparer and the man who raised the commercial’s elegant Clydesdale:

The man went to the tax place in the mall. The tax preparer was a young guy, Latino, wearing Dockers and a tie. “So you haven’t worked for a full year?” he said.

The man nodded. You could really hear the guy’s accent, he thought, when he said the word “year.”

“The last time you worked was for…Budweiser?”

“I was training this horse,” the man said.

“A year ago then?” the tax guy said. “Nothing in this last tax year?”

“He was a pretty cool horse,” the man said.

The tax guy nodded, tapped something into his computer. The printer started to whirr. “We’re all set here,” he said.

This exchange—its palpable awkwardness, its deadpan humor of “He was a pretty cool horse”—is indicative of the level of quiet command that Housley holds over these stories, and the moments of which they are made. These moments buoy the collection, keeping it afloat amidst the very real waves of triviality in which commercials swim.

This collection is, too, so endearingly articulate, often falling into a lyrical mode that touches the pure joy, the unadulterated desire that the best commercials are able to engender. Like this passage, for instance, which closes “McDonalds”:

But then Laurel grabs a burger and takes a bite. She closes her eyes and smiles and chews and she’s beautiful and all of the sudden it’s like that part of her that’s secret, that she keeps just for her, is shining there in the late afternoon light, glowing, beckoning. I’m walking before I realize it. Then I’m running. As I get closer to the tables, I catch the first whiff of food—onion and cheese and a warm hint of grease—and I realize how hungry I’ve been all along.

And then there is Housley’s remarkable ability to tap into the genuine affect within a scene, as in this passage from “Intuit GoPayment”:

But perhaps the best example of Housley’s ability to slice open these commercials and expose you to their meaty, sad, voracious interiors, is this brief passage, from “Lexus”:

But then the glow deadens again and what’s left is the pit in her stomach, the pressure on her bowels, the feeling like she’s caught in an undertow, being sucked toward some blank horizon.

Housley sucks you forward as well—not to any “blank horizon,” but toward a beautiful one, toward something real and glowing inside yourself. Toward the sun.

And these stories still resonate even if you are not familiar with the commercials on which they are based. It is as Rosencrantz says in “Superbowl”: “I don’t understand Spanish, but I felt like I knew that song anyway.” But if you have seen the commercials—all of which the publisher, Outpost 19, has made available here —you will see, to use the words of the narrator of “Coors Light,” that living them again with Housley’s voice is “so much better than the first time.”

These stories of Housley’s are better than even the best commercials: they are wry and witty, imaginative, heartfelt. They are beautiful. They are exquisite displays of humanity’s capacity for imaginative empathy. Commercial Fiction is, without a doubt, one of the best books of 2013.

Dave Housley is the author of Ryan Seacrest is Famous, a story collection. Four Fathers, a book he co-authored with BL Pawalek, Ben Tanzer, and Tom Williams, will be published on Father’s Day 2014 by Cobalt Press. Another story collection, If I Knew the Way, I Would Take You Home, will be published in early 2015 by Dzanc Books. He is one of the founding editors of Barrelhouse, a literary magazine that bridges the gap between serious art and pop culture.

J.M. Gamble lives in the deep South where he’s a student at the University of Alabama. His poems and essays have appeared in PANK, Ninth Letter (online), Specter, Word Riot, and others. He is the author of the chapbook, And This Blank Card (Chantepleure Press 2013), and the Poetry Editor at Sundog Lit.