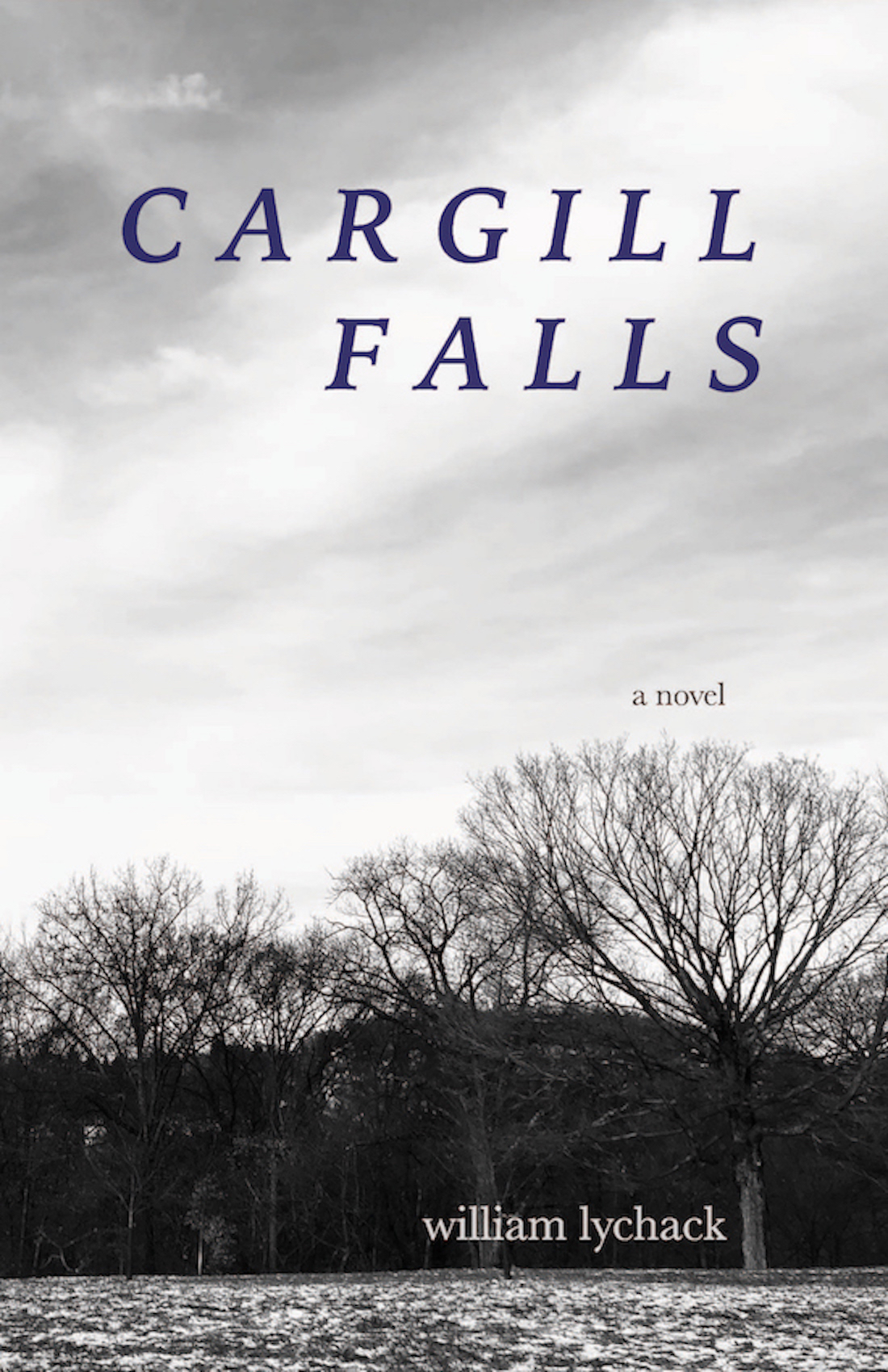 Two young boys find a handgun in the woods, a fact that forever changes their lives. One of them, decades later, will take his own life. The other, who long ago had moved away from their hometown, will return to speak at the memorial service honoring Brownie, his childhood friend, in the “old crappy mill town” of Cargill Falls, Connecticut, a place where “it seemed that nobody was allowed to have only one name” and where people had known young William as Mouse: “It was a law of nature: all things had to have more than one identity, more than one truth.” The reader joins a grown-up William on a pilgrimage — a journey of heart and mind to find truths amid life’s suffering — and that quest becomes the driving force of William Lychack’s new novel, Cargill Falls.

In a voice both poetic and meditative, Lychack, in this work of autofiction, moves gracefully back and forth across time, as he looks for the unnamable in what happened in the past as a way to make sense of the pain and confusions of the present moment. It is an elusive though essential endeavor: when faced with grief, people often hunt for pieces of what’s been lost even if what they seek can never again be found, at least not in the ways they once knew, and yet it is in the search itself that healing can begin and peace be found. As Lychack mines memories, photographs, and artifacts of family history, he leads us on a tour that is not mere nostalgia; we sense that something real and vital is at stake. “I am,” Lychack writes, “a ghost sifting for something solid in the ashes.”

Cargill Falls is a small town in Connecticut’s “Quiet Corner” in 1980, when Brownie and Mouse share with their friend, Breeze, both the secret of the found gun and its power. Brownie has everything that Mouse and Breeze do not — a house where “the trees stood tidy and straight,” a cottage on a lake, a little brother, a father, and even a dog — but the other boys share something that runs deep and carries risk: “Some kind of violence needed to be released from inside of us boys, something I’d always wish I knew the reason for, something I’d want to understand and let loose somehow, this rising force I’d have to clench my teeth against.” The threat of violence seems everywhere they go, but just when we want to stop time, change the past, and create less painful futures for these boys, Lychack, in a direct address to readers, calls us instead to pay attention to the present moments of our own lives:

Instead of reaching back to save these boys, perhaps it’s these doomed boys reaching forward to save you. Maybe that’s why you can’t seem to change anything, because they’re not allowed to change anymore. They’re not the ones at stake in this. It’s no longer possible for them to be different. If anything, they’re the ones whispering forward to you. They’re the ones trying to help you feel your way through.

The reader, indeed, may be the one who needs saving, as Lychack’s words suggest. Throughout the story, there is an invitation to make a pilgrimage, to engage in the same kind of “sifting,” to search for truths about who we are and who we might become. Cargill Falls is a story far larger than the sum of its parts, much more than a simple tale about adolescent boys and small-town life; it is an allegory of our human quest to find meaning in life’s suffering. Again, Lychack invites the reader to examine our own lives, to consider our own stories, and to face the suffering we carry along with its consequences:

(T)he Buddhists have this idea of original suffering. This is something you carry with you your whole life. It’s not always obvious to you what the suffering is — or sometimes it’s so obvious you don’t count it as anything — but every choice you make can be traced back to this one thing, your giftcurse, your entire character stemming from this.

Cargill Falls is a book to which readers will return, both to savor the prose (“sunlight like coins falling through the trees”) and to ponder the layers of the story’s meanings. Lychack’s storytelling voice, as both author and character, is clear, honest, and wise, so that the reader feels part of an intimate conversation with one who digs deep to find truth: “A person can know everything that will happen, but still never be sure what it means.” Cargill Falls is a meditation about how to learn to live with deep attention to the moments of our lives, and a compassionate reminder that what is done and said matters and can make a difference long after we are gone.

Along with his new novel, Cargill Falls, William Lychack is the author of five previous books: The Wasp Eater (a novel), The Architect of Flowers (stories), a cultural history of cement, and two titles for children. His work has appeared in Conjunctions, Ploughshares, The Southern Review, The American Scholar, Story Magazine, and elsewhere, including The Best American Short Stories, The Pushcart Prize, and on public radio’s This American Life. He has received a National Endowment for the Arts Fellowship, a Christopher Isherwood Foundation Award, a Sherwood Anderson Award, and has been a Barnes and Noble Discover Great New Writers Selection. He lives in Pittsburgh, Pennsylvania, with his wife and three children, and teaches at the University of Pittsburgh.

Jan K. Nielsen studies creative writing in the Master of Arts in Interdisciplinary Studies program at the University of Arkansas at Little Rock. Her work has appeared in Necessary Fiction. She is the minister of the Unitarian Universalist Church of Little Rock.