Bolt From The Blue by Jeremy Cooper 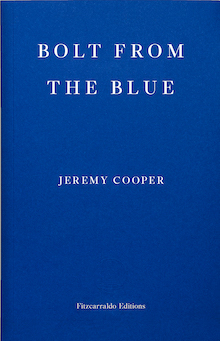 Who among us can honestly say that on occasion (or rather more often) we haven’t treated our parents like complete and utter shits? Even setting aside the toddling tyrant years from 0 to 5, when un-reflexive solipsism is built in, the parent-child bond tends to be something of a one-way street well into adulthood. And, it seems that for the most part we’re pretty comfortable with that arrangement, fifth commandment notwithstanding. The question is whether parents might not occasionally be tempted to respond in kind, wittingly or otherwise.

Bolt from the Blue, the art critic Jeremy Cooper’s sixth novel, sets out to explore this relationship in a minimalist epistolary format (postcards and emails rather than sheaves of paper), presenting the correspondence between a mother and daughter across a span of thirty three years, beginning when the daughter, Lynn, leaves home in Sparkhill, Birmingham, to attend Central St. Martin’s art school in London in 1985. As the initial explanatory text notes, the story revealed in these brief missives is hardly comprehensive. Cooper appears drawn to the structure by the license it gives him to leave out as much as he likes — no need for exposition or getting people up and down the stairs — and concentrate solely on what seems important to the characters: art, in the daughter Lynn’s case, while the mother’s interests are a little harder to pin down, although drink and men certainly feature.

Even before it becomes apparent that Lynn has no intention of ever returning home, (“Mum, I’m afraid I won’t be home for Christmas or New Year,” before the first seasonal break is just the start) we are given to understand that their relationship has never been an easy one. Lynn’s father was only briefly in the picture and her mother had a stream of boyfriends that met with greater or lesser tolerance from Lynn.he refers to them with knowing snark in many of the postcards: “Are you really going to plant a peach tree? You’ll need a team of your ex-blokes to pick-axe the concrete first!” At heart, the messages they send to each other, which ooze with a tension that Cooper keeps deliciously taut throughout the novel, seem more like an attempt by both parties to reset something that has gone deeply wrong: exploratory sparring as a prelude to what one suspects both hope will eventually end in an exhausted, punch-drunk embrace.

Alongside the ebbs and flows of passive aggression, affection and sometimes breathtaking cruelty, we observe the progression of Lynn’s career in the world of contemporary art. 1985 would have been an extraordinary time to attend a major art school in London and sure enough we are given a privileged glimpse of the rise of the Young British Art scene based, one assumes, on Cooper’s own experiences. Cameos are given to many familiar names: Damien Hirst (‘A short, ballsy bloke from Leeds’), Rachel Whiteread, Sarah Lucas, Tracy Emin, Gilbert and George et. al., as well as several real-life dealers, collectors and administrators from the field, not always to their advantage. Lynn specializes in film and installations, and as they begin to attract galleries, collectors and, eventually museums, her correspondence also includes gallery and catalogue texts about the art she makes.

The other major element of the novel are descriptions from the perspective of older Lynn of the postcards on which the texts are written, some made by Lynn but most by real-life artists and designers. They are most likely included in the book that accompanied the exhibition that Jeremy Cooper organized at The British Museum of postcards made by contemporary artists. However easy it would be for the reader to look up the images for themselves, the fact that in the novel we only get the descriptions is important, speaking to its overarching theme. Throughout the text, the reader is continually confronted with the issue of language and communication: how best to convey feelings, experiences and concepts that are necessarily ambiguous and contradictory. On the emotional level Lynn and her mother appear to be groping towards a connection without ever quite bringing themselves to let go of their resentment: guilt, love, anger and empathy coexist in equal measure. The mother wants to show her daughter that she, too, might have made something of herself under the right circumstances (the arrival and need to support Lynn not being one of them), the daughter feels guilty about abandoning her mother but knows it was the right thing to do. Essentially they both understand and are confounded by one another, it’s no wonder they’re constantly struggling to find the right words:

“How many times have I asked you to call me Mother not Mum?… Do without dear if you insist, though it’s definitely rude not to…”

Dear Mother
Note: “dear” as in costly, to me, in emotion.

On the intellectual level, there is the art critic’s dilemma of having to explain things that intentionally defy explanation, that need to be experienced rather than read. It’s a challenge that can twist even the finest minds into elaborate knots, and that’s often borne out here both in Lynn’s flailing attempts to explain her work and ideas to her mother and in the more polished, professional texts that appear later on. In fact, Bolt from the Blue draws most of its energy from contradictions of every kind: Lynn’s mother admires Margaret Thatcher but “would never vote Tory,” while Lynn is fiercely anti-establishment but ends up a wealthy establishment figure. (The old chestnut of the art world’s dependence on dirty money and privilege gets a thorough airing). Lynn is repulsed by and deeply curious about her shady father… the list goes on but it’s no spoiler to suggest that none are ever truly resolved. If you’re looking for clarity, Cooper seems to be saying to us, you’d better try a different book. But if it’s the messy tangle of art, life and family you’re into, as Lynn’s mother puts it in one of her letters, Bolt from the Blue is well worth a read.

Jeremy Cooper is a writer, journalist, and broadcaster who has written and published widely on art and antiques. He has appeared regularly on BBC’s Antiques Roadshow, was co-presenter of Radio 4’s The Week’s Antiques, and is the author of five novels and several works of non-fiction on art and design. He won the 2018 Fitzcarraldo Editions Novel Prize for Ash before Oak.

Kit Maude is a translator based in Buenos Aires. He has translated dozens of Latin American writers for a wide array of publications and writes reviews for Ñ, Otra Parte and El Diletante in Spanish and the Times Literary Supplement, World Literature Today and Necessary Fiction in English.