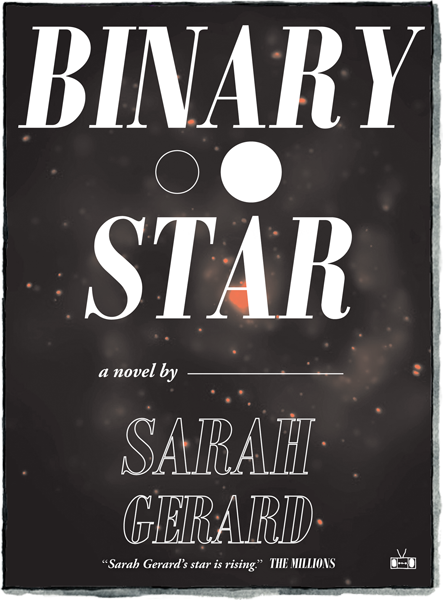 Sarah Gerard’s Binary Star is the type of slim, ambitious volume that can be too ethereal or convoluted to leave a lasting impression, a series of ideas rather than a polished product. But it opens with a flourish of creativity, introducing two main characters and the metaphor by which this work attempts to define them. It builds on this as the relationship’s construct reveals itself, emerging as a fascinating study of codependency: Lovers continue to orbit each other as long as there is some field of gravity pulling them back together. The gravitational force can be physical attraction, and then an emotional pull, and then—in some cases—an ugly and dangerous dependency. This is Gerard’s “binary star.”

The couple—John, an alcoholic supported by parental coffers, and our nameless anorexic narrator, weighing 98 pounds (at least at first) and checking her scale multiple times per day—go on a road trip before returning to everyday life. For her, everyday life means teaching and grad school, where she’s studying astronomy. For him, it means, well, not much—mostly he’s the narrator’s sidekick in their emotional dance, but he also gets them into veganarchism.

From the beginning, the relationship is presented as a psychological tightrope act, a verbal dance, brutally perfect and poisonous. Two people fully aware of their defects convince themselves and each other that the status quo is acceptable:

I can’t be responsible for you.
Because what if you weren’t okay? No, I don’t blame you.
Of course not. How could I blame you?

We’ll get used to this.
We’ll find a balance.
Closer to you than you are to me. You are massive.
We need to do things on our own.
I can’t…

Just being awake burns calories. Just being awake brings me closer to you.
To perfection.
Tomorrow, I will work for free and then go to class where I take in stars.
A star’s luminosity is determined by its mass. I am faint.
I feel faint.
I am reeling. I shine.

That passage is from the opening 40 pages of free-form poetry with a stream-of-subconscious voice, which allows the spoken and unspoken to stand side by side, indistinguishable. Readers are placed in the mindset of the narrator, forcing emotional investment by dropping them directly into the story.

Eventually, a slightly more lucid but still poetic narration takes over. The pair embarks on their road trip, stopping at a “small zine distributor” in Portland who ends up selling them on ethical veganism. A significant portion of the time the two spend together is spent on veganarchism, which encourages anarchy as a way to draw the public’s attention to the unethical treatment of animals. Adding this ethical connection to the already established emotional and clinical ways they depend on each other only strengthens their connection and resolve. Each revolution in their orbit leads to a tighter spiral.

Which returns us to the central metaphor of the work. Gerard’s lovers need each other; they need to enable each other in order to continue their course, in order to avoid falling out of orbit and into the real world on their own. The depiction of this relationship is fearless, confrontational, empathetic—less concerned with teaching readers a lesson than immersing them in the whorl of compulsive dependency.

In depicting her narrator’s ever-worsening eating disorder, Gerard is wise not to dwell on questions of why. Although the narrator does bare her body image insecurities briefly, in flashes (“I sit in a way complimentary to my thighs: one crossed over the other, leaning more on the right hip than the left: a perfect balance”), readers are largely left to assess the way a mind can enable and encourage a body to live this way. Gerard balances the narrator’s knowledge that she uses John to rationalize her illness with the seductive tug of that rationalization. That gravity is embodied in the irresistible flow of her prose.

I wake with a tube in my arm. Calories.
I think I can stop when I want to.
I can be well when I want to.
I can stop this right now.
Be whatever I want to be.
Nothing.
Whatever I want.
What do I want?
Fill me with fluids.
Shed unnecessary matter, I say.
They’re not listening.
What do I want without John?
I love you.
I want nothing. Nothing. I actually want Nothing.
But to chew on the hospital sheets.

The one-sided dialogue lends a chilling feeling; no friend or loving partner intervenes to correct that wavering mind. Instead, “they’re” not listening. The reader is left to witness and comprehend this in silence, to feel the weight of her unrelieved suffering. Such a bold portrayal leaves Gerard (and the narrator) with nowhere to turn for consolation but inward.

Most of Gerard’s creative decisions appear to marry style with substance. It might be said that bold portrayals, creative zeal and risk-taking are all cornerstones of the book’s small but flourishing publisher, the Ohio-based Two Dollar Radio.

Two Dollar Radio doesn’t care about mass consumption or warm, secure prose. It cares about making sure the opposite of that is represented. Titles like Crapalachia, Orange Eats Creeps, Ancient Oceans of Central Kentucky and A Questionable Shape all share an ambitious quality—stunningly unique at best, opaque at worst—that requires a patience and focus from readers as brooding, abstract themes replace much in the way of plot.

The scant plot and meager characterizations provide an ideal platform for Gerard to unveil the mechanics of a relationship built on addiction and manipulation. It’s a perfect marriage between author and publisher that presents us with Binary Star and its perfectly destructive relationship.

Sarah Gerard’s work has appeared in The New York Times, New York Magazine’s ‘The Cut,’ Paris Review Daily, Slice Magazine, The Los Angeles Review of Books, Bookforum, and other journals. She is the author of the chapbook Things I Told My Mother and a graduate of The New School’s MFA program for fiction. (sarah-gerard.com )

Justin Stephani is a bookseller and programs manager for Politics & Prose Bookstore in Washington, D.C. His writing has appeared on The Rumpus, Electric Lit, and Tweeds Mag.