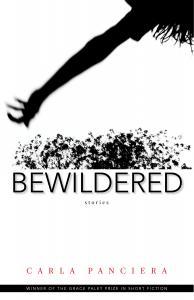 Winner of the 2013 Grace Paley Prize, Bewildered collects ten stories that widen the cracks in conventional façades — pleasant neighborliness, self-sacrificing motherhood — to expose what squirms beneath. Though the stories vary in tone, theme, and subject, they’re unified by the author’s gift for the incisive one-liner, the wry observation that illuminates the whole.

Panciera’s characters share a burning existential question: how to enjoy the privileges of adulthood without actually growing up. They’re arrested adolescents, adults who’ve not quite outgrown this conflict, and these stories are cautionary tales about its illusory promises and hidden costs. It’s a grown-up dirty secret that conventional choices in work and family don’t necessarily produce contentment. Panciera is a wonderful anatomist of the ways in which people making conventional choices that feel “free” and “adult” manage to thwart their own development.

In “End of Story,” for instance, a rigid man has left his equally rigid wife. She suffered a miscarriage and then, disappointed by her husband’s muted response to this first loss, embroiled herself in an affair. Colin is stuck, unable to end the marriage or rebuild it. He can’t see that no matter where he goes, he takes his rigidity with him. It’s not wholly his fault. He comes by it honestly, through a process of generational transmission that Panciera smartly dissects. Returning to his mother’s house, Colin discovers “a neighborhood whose houses peeled more and more each time he drove by them.” Yet amidst all this decay, “the gray shingles of his mother’s house maintained their dignity.” In this shingle-armored house, so full of children and so empty of love, there was no room for anything but the routines that kept the chaos under control. When one of Colin’s eight siblings gently ribs their mother, saying that she had too many children, she shoots back: “Which ones should I not have had?” What she is saying is that imagination is so dangerous, it can break up a family. The emptiness of Colin’s adult life testifies to the generation-crossing force of this belief. “How had this house ever gotten so quiet,” Colin wonders, bewildered by the simplest facts — time passes, childhoods end. “So many inevitabilities had eluded him,” the narrator observes. “So many endings he had no imagination to predict.”

In “Singing Donkeys, Happy Families,” Panciera shows the stultifying effects of convention from the distaff side. The main character, Mags, is a young, full-time suburban mother. Like status-conscious adolescents, the mothers and fathers in this group attend mainly to each other, each trying to see how the other measures up. Not surprisingly, their children are all somewhat neglected, arriving at school sticky, fidgety, “their hair resembl[ing] nests of long-departed sparrows.” A lice outbreak causes predictable finger-pointing. Selected as the scapegoat, Mags falls apart. She can’t even treat her kids’ head lice. The ordinary shampoo treatment is “a poison,” the “natural stuff” prohibitively expensive and even so, it’s sold out everywhere. Her home-brewed solution produces an explosion of fresh difficulties:

Olive oil with a drop of tea tree beneath a shower cap seemed the most effective and most accessible [treatment], but the girls cried so hard because of the smell, Tyra threw up all over her bedroom floor, Desa cut her own hair, and Jolie regressed to baby talk. Three days into the siege, the washing machine ground its guts so loudly, Mags thought a plane might be spiraling out of the sky, heading for their deck. She considered running outside and positioning herself just so.

Suicide by plane, or washing machine, would certainly relieve the tedium, and the humor in the description makes Mags’ catastrophizing easier to empathize with. When Mags breaks a serious taboo, by falling in love with the husband of another woman in their group, we are inclined to extend our sympathies. With her middle-class comforts, Mags doesn’t look like a person in a cage. But she is. Lulled by conventional marriage and motherhood, she finds herself trapped by responsibilities she is not at all equipped to meet. Desperation has pushed her to an extremity: “She didn’t explain why that spark of interest in another man, that flicker of possibility, had been so important for all of them. How it had gotten her out of bed each morning, how it had tethered her to this life.”

The overall strength of this fine collection made weaker moments stand out. Panciera’s incisiveness, which provides so much of the interest throughout, occasionally devolves into an easy joke. A school principal has a secretary with a “large head of gray hair shaped like a mushroom” and her name, we’re told, is Hedda Horn — a joke that only distracts. Elsewhere, stabs at cleverness are just confusing. For instance, in “Weight,” two friends arrange a date for a bereaved third. The group sits out late, drinking wine, and the conversation turns unaccountably to history. Someone announces that “freighters helped us win World War II.” Someone else objects: Wasn’t it submarines? “The obvious is never what saves us,” is the portentous reply. In the next moment, the prospective new beau touches the bereaved woman’s ankle. “You have a scar there,” he observes, and we are meant to understand that he is pointing to her larger loss. Yet, this all-too-obvious connection renders the preceding digression suspect. I even wondered if might have been a pre-emptive strike against the objection that short-story characters pointing to scars are too often vehicles for a cheaply obvious epiphany. At any rate, I wanted more from this talented author. Her materials are so rich, and her craft so generally meticulous, there’s no need to hang onto moments, like these, that might be anything less than first rate.

Carla Panciera is the author of two collections of poetry and has published fiction, memoir, and poetry in several journals, including the New England Review, Nimrod, Chattahoochee Review, and Carolina Quarterly. A high school English teacher, she lives with her husband and three daughters in Rowley, Massachusetts. You can read her blog at www.carlapanciera.com

Diane Josefowicz is a regular reviewer for Necessary Fiction. Her fiction has appeared in Conjunctions, Fence, and the Saint Ann’s Review.