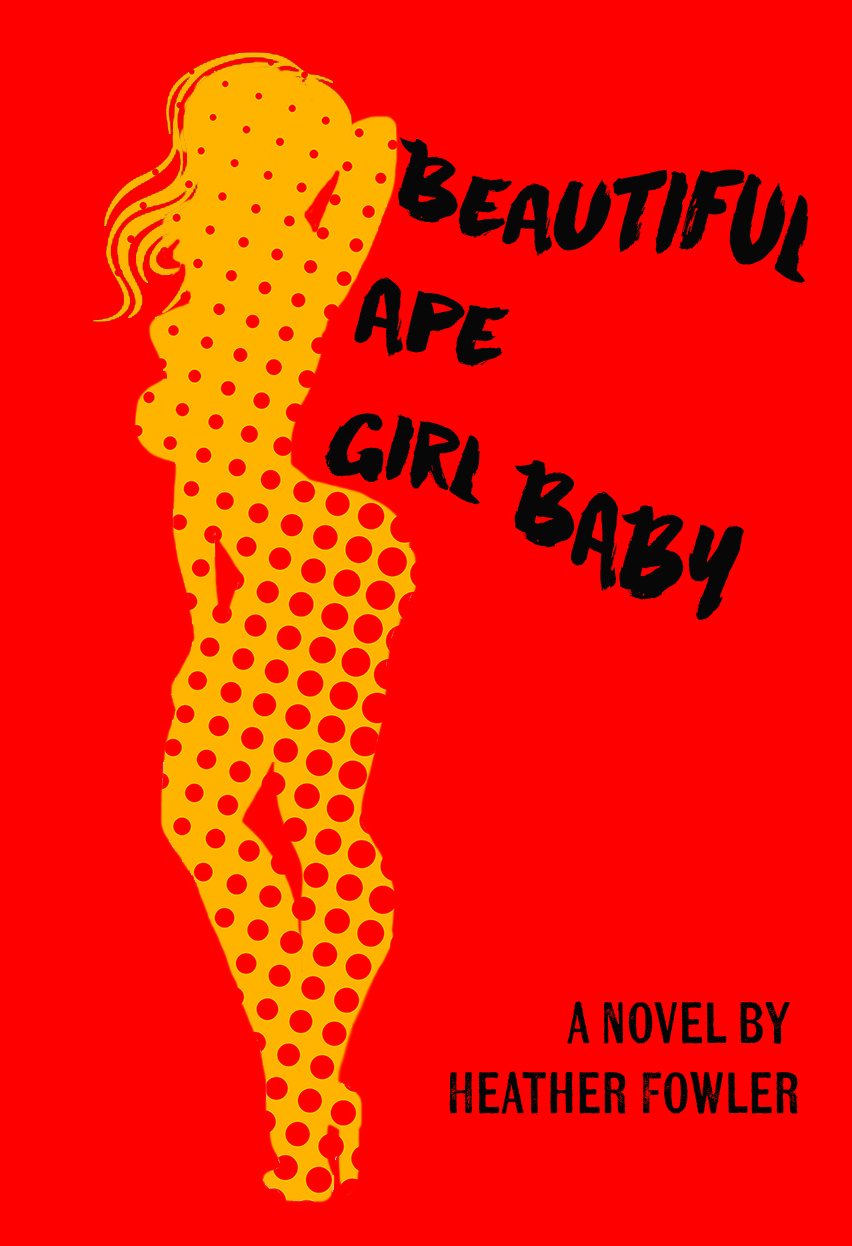 Heather Fowler’s Beautiful Ape Girl Baby is a tale of self-discovery, a comedic road trip, a discourse between humanism and naturalism—and of course the birth of a memorable new character, Beautiful.

Beautiful has been kept like a ballerina in a music box for the first seventeen years of her life with mentors, tutors, and live-in “friends,” all on her father’s payroll and all with the task of giving Beautiful a positive self-image. Her parents go to ridiculous lengths to create a microcosm in which the beau ideal corresponds to Beautiful’s appearance and demeanor. As her name—Beautiful Ape Girl Baby—suggests, she is born with full-body hair, animal strength, and the fury to match it. She’s also born into a family rich enough to dress her in Prada and educate her in various schools of thought. In essence, her parents do everything in their power to humanize her.

Curiously though, they do everything except teach her to shave or pay for electrolysis. Hair in Beautiful Ape Girl Baby plays a decisive role in being human or animal, masculine or feminine. Beautiful is the victim of a grand experiment to overcome the constraints of cultural norms: to make her full coat of hair feminine, her rage a mark of strength. But as I see it, Beautiful’s hair is a metonym for beast while in the case of Thomas, Beautiful’s driver, it’s a metonym for man. While the narrative’s comment on gender politics is multi-layered and at times subversive, the common denominator here is how socialization, gender or otherwise, prevents the individual from discovering self—in fact how reason, philosophy, and language impede natural urges like sexual gratification, fear, and trust. You could even take this as far as doubting reality altogether, and there are plenty of passages in Fowler’s novel to prove this, most of which come from Beautiful’s mother who warns her repeatedly that nothing in the “real” world is actually real.

With all this competing philosophical banter, it’s easy here to neglect one very important aspect of Beautiful Ape Girl Baby: Fowler’s narrative is darkly comedic. Thanks almost entirely to Beautiful’s over-eloquent and self-indulgent narrative voice, Fowler gives us a great new tragicomic character confronted with an unappeasable anguish, a profound, unresolvable sadness of the soul: her toska, to be more concise and more Russian. In the following passage she helps her driver deal with the anguish and rage he feels toward his mother:

“You sir,” she said, “are beautiful to behold!” She wiped his face again, which was ruddy and wet, but a far sight less snotty, and then she said kindly, but with much fervor, “And you know what else, Thomas? I’ve noted you have some repressed rage issues. You have never fully expressed that rage, which means you have been stuffing it, so this means you have a lot of it, all stuffed down. I myself don’t repress my rage. This is why I’m so well-adjusted. But you’ve repressed it for so long you no longer recognize your rage for what it is! Thomas, you need to let that rage folly out!”

Beautiful seems to deal with the psychology of her situation as a non-native speaker uses a foreign language. And she often uses this language to provide therapy to the men around her (exceptional fodder for dark humor). Deft comedic writing often springs from such depths, and this novel is all these things: deft, comedic, and profound. And it’s also a road trip.

At seventeen, Beautiful’s primal urges drive her to set out on her own. You could see her road trip as a sort of bildungsroman jaunt, but I think it’s probably better to see it as an instinctual migration. Beautiful’s first priority on her first trip outside the estate is to mate—this is, after all, in part a love story—and it must be pointed out that she kills the first candidate when he admits he and his friends are planning to gang-rape her. There’s much more to say about Beautiful’s instinct to kill, and I’ll revisit this theme when we have a look at Fedora Man, the man who eventually “bleeds” her—Beautiful’s way of expressing her loss of virginity.

But before we do that, let’s talk about love. In the words of Ethel Chef, Beautiful’s mother:

Early on, your father said, “I want my daughter to love herself, above all, to adore herself, and find the acts of others only partially concerning. People who love themselves are the least like animals. Self-love will be her cure for this visual anomaly.”

It’s the definition of animal that’s troubling here but also the primacy of human. In a pivotal scene in which Beautiful finally meets her advice-wielding role model, Ida May Haze, Fowler puts these telling words into Ida May’s mouth: “…you can’t win, my new friend. Don’t even try. You’re a woman. He’s an animal.”—a misdefinition of course, as cruelty for the sake of cruelty is primarily human; animals rage out of instinct, kill to survive. But can animals love? As an animal thinly disguised in philosophy and high fashion, Beautiful finds it impossible to understand or even ennoble the human concept of love. On the other hand, she understands sex and power quite well:

“Before I was in love, I felt I understood love much better. In fact, the longer I’m in love, the less I seem to know. Love’s confusing. And besides, you can try to take the beloved back and then have them spit in your face! I know that. Not to mention what you get when you try at the wrong time! In case you don’t know, that’s radio silence, which leads to hate!” She lifted her cell and texted Fedora Man with four texts: “Give me.” “Everything.” “I want.” “I have clout.”

Fedora Man and Beautiful do share something akin to love. At times they seem to speak the same language. They have at least one thing in common: they are both killers. The difference is that Fedora Man is obsessed with killing as evil, while Beautiful sees killing as a necessary result of her rage. Fowler’s Fedora Man/Beautiful pairing beautifully mirrors the historical discourse between humanism and naturalism with Beautiful as dominatrix-cum-Freudian therapist. While it’s hard to say what is real and what is unreal in this story, Ivor (Fedora Man) seems to be Beautiful’s long-awaited soulmate.

Yet this is not meant to be. Beautiful’s story—her quest—is not about finding a man or resolving the issues with her parents. It’s about finding herself. And of course she does exactly that.

Heather Fowler is the author of four story collections and a collaborative poetry collection written with Meg Tuite and Michelle Reale. Beautiful Ape Girl Baby is her debut novel. She received an MFA in Creative Writing from the University of New Orleans. Fowler’s stories and poems have been published online and in print in the U.S., England, Australia, and India, with her work appearing in such venues as PANK, Night Train, storyglossia, Surreal South, Feminist Studies, and more. She is Poetry Editor at Corium Magazine.

Christopher Allen is the author of Conversations with S. Teri O’Type (a Satire) and the managing editor at SmokeLong Quarterly. His book reviews have appeared at Necessary Fiction, [PANK], Word Riot, The Lit Pub and elsewhere. His own fiction has been featured in Eclectica Magazine’s Best of Speculative anthology, Night Train, Indiana Review and others. He lives somewhere in Europe.