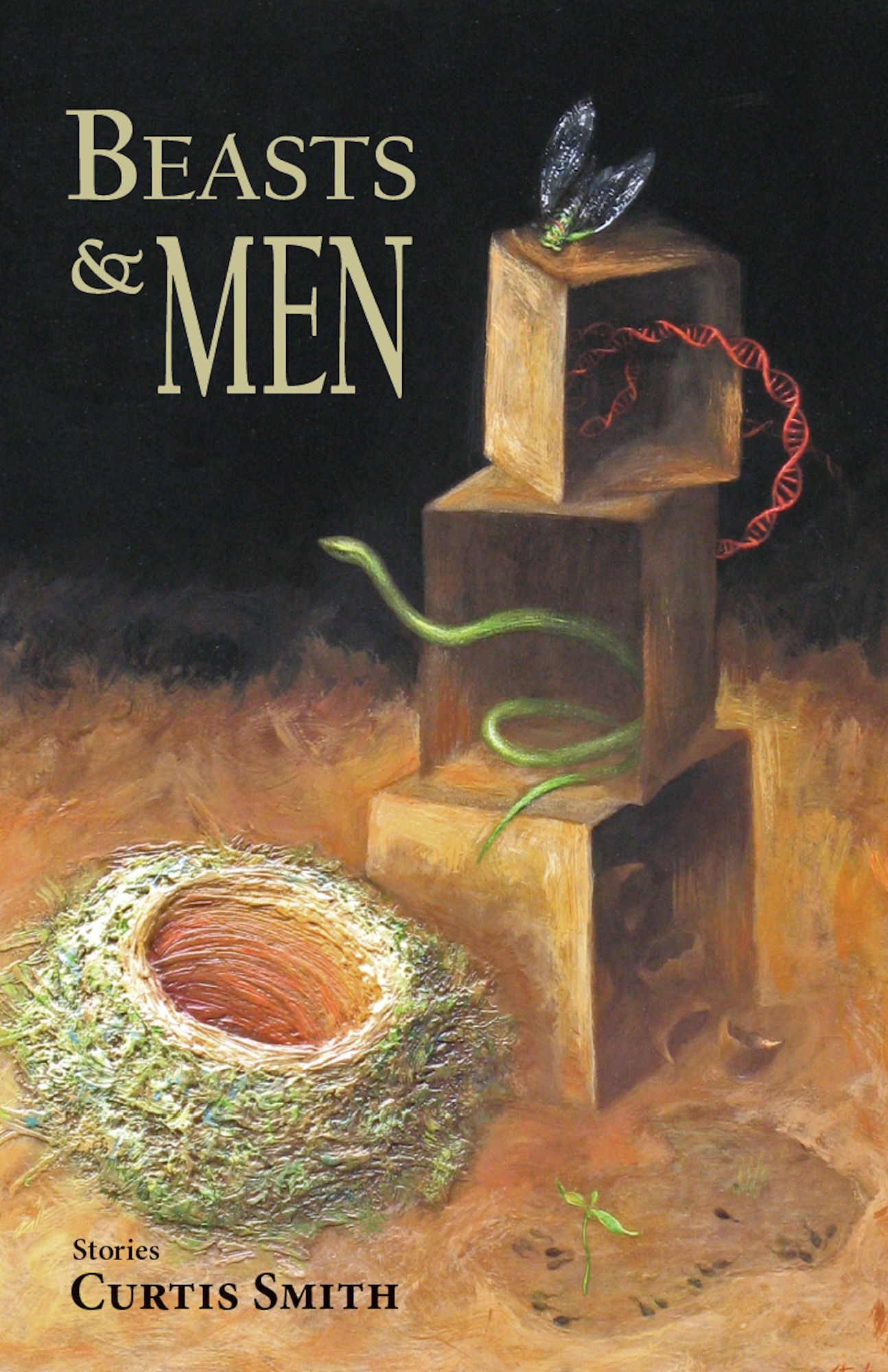 The narrators and characters found within Curtis Smith’s Beasts & Men are equal parts desperate and muted, all sharing the same quiet, worn-out acceptance of what life is for them, and what it is likely to be. It’s through this common thread of disenfranchisement that Smith builds his newest collection of short stories. Whether looking into the secrets of a marriage or the violence of a child, Smith maintains the same carefully constructed sentences that give the reader some sense of urgency yet blossomed.

One of Smith’s previous collections, Bad Monkey, was described by Raul Clement as having “subdued lyricism,” a quality which manages to make the most over-the-top storylines work well. That trend continues here, though perhaps without the fantastical plots. His sometimes jarring sentence structure is controlled as to not overpower the fluidity of the action, as demonstrated during the opening scene of his story, “Silent”:

On her desk, a sketchpad. The paper’s ripples remind Sylvia of a breeze-touched pond. The texture is designed to snag the charcoal flakes, but Silvia prefers her special pens. Charcoal is dull, vague. Sylvia’s honed pens hiss across the rough paper. Her strokes proclaim; they cleave.

A theme explored and emphasized throughout the collection is isolation. Whether self-imposed or brought on by circumstance, the characters Smith creates all have a silence of want around them. The casts of characters are relatively small (save, notably, for “Lenin!” which features a larger cast, though still very isolated), and this works well for Smith’s tight, almost claustrophobic style of writing. This may explain why some of the most powerful work in the collection are his flash pieces; which range from a permanently injured runner reflecting on his past in “The Runner” to a pair who abandon a struck dog in “The Adulterers.”

The flash stories and shorter of the short stories are Smith’s strongest work in Beasts & Men. They highlight his controlled language and the patient voice that characterizes his work. His longer pieces—as illustrated by “The Dry Season”—occasionally come off as tedious at times, lingering on images for perhaps longer than necessary to carry the point to the reader. This is an uncommitted criticism, however, as it’s difficult to know whether it only seems that these longer pieces struggle due to the concise strength of the shorter ones.

It is enjoyable to see that Smith doesn’t limit himself to a certain area or topic, though there are many stories that center on youth and grade school. He allows his stories to define themselves rather than let the collection define them—a healthy action for a writer who has several collections and works under his belt. The collection doesn’t come off as a thrown together mix of whatever the author had ready to print, but it also lacks the formulaic building of a writer who no longer sees the value in rounding out collections with distance of subject matter. Smith comes in somewhere around the middle: his characters all possess the same isolated longing for something, but none of them are necessarily carbon copies of each other. The stories themselves share traits (as all stories do from the kind of writer who has found his or her voice), but they do not borrow heavily from each other, either.

Beasts & Men contains a continuously reserved voice, no matter the scene. Consider this passage from “The Dogs, The Dogs” which takes place just as the main character sneaks back to her family farm:

A bruised sky, lightning in the distance. Susan and Eric stepped across the alfalfa. They’d been on the move since late afternoon, bumming rides and shadowing the tree lines, their eyes nervous with each passing car. Nightfall found them at the edge of her family’s fields. In the air, cicadas, the scent of impending rain. The birthright Susan would never inherit whispered with the rustle of leaves and dirt. They crested a gentle slope. A hundred yards downwind, the farmhouse’s lit windows strained from the dark.

It’s this writing—intertwined with images from the landscape, weather, and characters, which makes the collection work. Each character is solitary, but surrounded by a complete picture of the world they inhabit. Smith manages to detail how his characters feel in the situation—not just their emotions but how their shirts feel on skin or how the weather affects their bodies. These attentions make the characters seem familiar. It makes the characters seem like someone you could see at a bar or recognize on the street.

This is where Smith truly shines—in his ability to put average, believable people into otherwise unbelievable situations. Beasts & Men is able to do just that throughout the collection, creating stories that maintain the interest of the reader through a desire to see how these very human characters respond.

The titular story is perhaps the best example of what Smith is capable of. It is only a page or so long, but carries the entirety of a man who, after a night of drugs and fighting, looks in on his own house like a common thief or peeping tom. In just a few paragraphs, we witness and understand how he has come to surrender to another life, how he sees himself as completely outside of the more comfortable, and how he cannot go back. This is likewise how the reader feels upon completing the collection: a stranger looking in on lives that we cannot be a part of, but are able to understand and witness completely.

Matthew Kabik lives and writes in Lancaster, Pennsylvania, and recieved his MFA from Arcadia University. His fiction has appeared in Five Quarterly, Nib Magazine, and Cease, Cows, with stories forthcoming in Structo Magazine and Pea River Journal. Follow him on Twitter: @mlkabik.