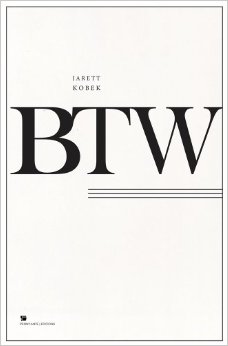 There are times in life we find ourselves adrift. We stumble along, distanced from love, unclaimed by family or career or geography. We are left alone with ourselves, and lacking vision and a compass of beliefs, we grope our way forward, engaged in the unique situation of being both blind yet seeking. In his funny and touching new novel BTW, Jarett Kobek takes us through a landscape of modern ennui, introducing us to souls who move like ghosts, living yet leaving few marks upon their world.

The plot follows a recognizable trajectory, a bildungsroman-type tale fraught with reckless decisions. The fact that Kobek infuses this familiar roadmap with enough life and heart to make it seem new is a testament to his skill as a writer and storyteller. We may not understand his narrator, and we may cringe at the situations he puts himself into, but we can’t help but cheer for him. Or, at other times, want to shake him back to his senses.

Some books are blessed with a feel, a prevailing mood which starts on the page but then evolves into an aura every time we reopen the book. The effect is cumulative, a type of contact high one becomes aware of only after the fact. It’s a fragile state, one achieved through detail and choice and a delicate attention to craft. Kobek’s narrator is less a participant than an observer, a drifter within the confines of his own life. He is the maker of cross-country leaps, an apartment dweller who never fully unpacks, a man who only reluctantly learns how to drive. This rootless vibe echoes not just in the actions of the characters but also in the filtering eye Kobek casts upon the landscape. Consider this description of the narrator’s time at NYU:

The city’s heyday had passed long before our arrival, but there was something wonderful about living in an inconsequential time, of knowing no pressure to perform.

Then Kobek takes this mood of inconsequence and transports it and his narrator to Los Angeles, a setting he paints as beautifully superficial, a Mecca of partying at overpriced bars and strangers’ houses, where a night isn’t complete without a drunken scene or the sighting of a B-list celebrity. Kobek brings us along as his LA slides past, a silicon landscape where nothing sticks and everyone keeps rolling toward a vague future.

This sense of drift finds its embodiment in Kobek’s narrator, a young man whose most passionate interactions involve his observations of novels and films, fictional worlds in which he appears more engaged than in his own reality. The narrator possesses a core that calls to us, a nucleus of lost love and damaged family relationships. His outer reality consists of his interactions of the moment, a series of public poses and stances. Between these, there exists a void, an expanse bereft of meaningful work, bereft of a system of belief or a drive to achieve a goal. Yet, like an atom’s electron cloud, there are sparks in the emptiness, flashes of kindness and honest reflection that leave us with hope for this young man.

One of the narrator’s greatest graces is his ability to find humor, both in himself and in the world around him. We witness improbable reunions and odd twists of fate. There are wry conversational exchanges, the back and forth of young people who barely take the time to listen to each other, folks more comfortable interacting with their phones than with their fellow human beings. The narrator often constructs lists—a structure which provides some laughs but which also show us a man grappling with his own take on life, an internal questioning and rearranging that confirm he is still searching, still willing to keep his eyes open and learn. Balancing this wit are beautiful passages, moments of naked soul confessed to the anonymous reader, but not to the narrator’s cast of friends. Consider this gem contemplating a relationship’s end:

There would be only a dull contempt, an arthritic ache, and a series of questions without any answers. I would be the worst mistake of her life. There would only be disgust and another glaring occasion of human treason in the mind of a woman who believed the worst of all people, who believed in judgment and in the punishment of an angry God. I would miss the wild dream of her, of thinking, briefly, that life’s absurdity might be conquered by mutual misunderstanding.

As a writer, I admire the touch that surprises, the turn of events and character that leaves me feeling as if I’ve finished a journey, my point B distinctly removed from point A. Such is the case for the narrator’s relationship with his father, a current that stirs beneath the plot in BTW and which carries its own emotional and narrative arcs. We are led through phases of understanding, the father never more than a memory or a voice on the phone, yet his presence evolves to occupy a dynamic place in the story, for despite his ramblings and tirades, his father grows into the closest thing the narrator has to a voice of reason.

Ultimately, BTW is a novel about forgiveness and its role in our lives. Kobek’s narrator must make choices—and in the end, he realizes that one of the keys to finding peace in the present is making peace with his past. Forgiveness, after all, is seldom a once-and-done act, its pains and challenges never truly disappearing, only—if we’re lucky—fading. Perhaps, in this novel of journeys made, this is the most important trip, a man’s expedition into the heart to reconnect with what he has lost.

Jarett Kobek is an American author and essayist living in California. His book ATTA (Semiotexte, 2011) is a fictionalized psychedelic biography of the lead 9/11 terrorist and If You Won’t Read, Then Why Should I Write? was published in 2012 by Penny-Ante Editions. His most recent criticism, «Je suis devenu un magicien noir», was published as a catalogue essay by White Cube of London.