An Untamed State by Roxane Gay 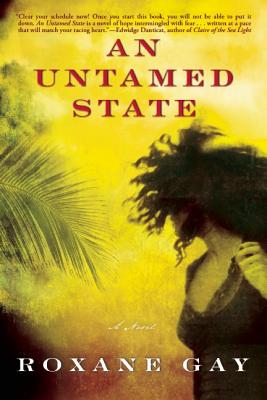 An Untamed State is difficult to read. This isn’t a plot or character issue, nor a problem of challenging vocabulary. What makes the novel difficult is the content, and especially the way Gay approaches the content: with full-forced, head-on, unapologetically clear writing about the kidnapping and rape of a young mother. The result is a story of sharp focus that will have a lasting impact even on a desensitized population of readers accustomed to sex and violence in movies, music, and television.

This is Gay’s debut novel, evolved from the short story “Things I Know About Fairy Tales,” originally published here at Necessary Fiction in 2009. First-generation Haitian American Mireille is the daughter of a successful businessman in Port-Au-Prince. While vacationing in this city with her husband and infant son, she is kidnapped by men driving black SUVs and carrying automatic rifles. These captors hold her hostage for thirteen days, during which she is repeatedly assaulted and raped. The men demand a hefty ransom from Mireille’s father, who refuses to pay in order to protect the rest of his family.

Mireille is a strong-willed woman, independent, persistent, and sometimes stubborn. Back in the states, she is a partner and cofounder of a law firm. She does not prove to be an easy prisoner—resisting, struggling, and fighting back at every opportunity:

I threw my arms in front of my face as he pushed me forward, tried to slam my head into the mirror. The glass shattered. Tiny shards burrowed into my arms, creating tiny but very sharp dots of pain. It was hard to focus. I could only think of one word, fight… My escort began fumbling with the waistband of my jeans, his fingers pressing against the bones of my hips as he tried to tug my pants down. I kicked back and connected with his knee. He growled, muttered angry words. The barrel of his gun dug sharply into the back of my neck. “Enough,” he said. “Fight me and you will regret it.”

Of course, no matter how hard she fights, Mireille is just one woman at the mercy of a gang of men, and to survive she must occasionally surrender. To surrender, she has to forget who she is, to become another woman altogether. By the time she is released, she hardly remembers the person she was before. There is no justice here, no moment of victory and celebration for Mireille and her family. She may no longer be physically restrained by her captors, but the lasting physiological impact of the experience will be just as punishing. “I wanted to remember what it felt like to move without being chased,” she says. “There were things inside me still not set right.”

There is some space carved out in the book for love and even romance. Woven through the story of the kidnapping is the courtship of Mireille and her husband Michael. Fans of Gay’s short fiction will find this exciting, intimate storyline reminiscent of some earlier work (i.e. “North Country” and “The Year I Learned Everything”). Yet everything is not soft and gentle between Michael and Mireille. They are rough and aggressive with each other from the beginning:

Michael started pushing me back toward the staircase. He bit into my neck and fumbled with his jeans, trying to shove them down with one hand while he pulled my pants down with his other hand. The edge of a step dug into my back painfully. I ignored it. Then he was inside me and I gasped as he opened my body, a sharp ache spreading up through my stomach and down through my heels and he was shoving his tongue into my sour mouth, groaning loudly while he fucked me steady and hard. His hair brushed my forehead and my neck and I arched into him like I was hoping to conjoin our rib cages. He showed me how little I knew about him.

Set alongside the descriptions of Mireille’s rape and abuse at the hands of ruthless strangers, this emotionally-charged scene becomes chilling. Gay is purposefully blurring lines here, asking readers to locate the differences on their own.

An All-American white guy complete with wrestling trophies in his childhood bedroom, Michael brims with privilege without always recognizing it, leading to some heated quarrels between the couple. But this is just a primer for larger questions of privilege addressed throughout the novel. What makes a person privileged, and what are the implications of a privileged attitude?

At times the narrative arrives at familiar answers (wealth as a cause, disrespect or ignorance as a result), but the idea of privilege develops into a duality. Mireille’s captors feel a sense of privilege not because they are rich, but because they are poor. They feel a right to take from others. Their leader blames Mireille’s family for her captivity and blames the upper class for problems caused by economic disparity:

People like you always choose to absolve yourselves. You are complicit even if you do not actively contribute to the problem because you do nothing to solve it.

But when Mireille fires back, identifying the man’s own complicity, he is caught off guard. Despite the kidnapping, assault, and rape, the Commander sees himself as part of the solution, not the problem. This man sees violence and extortion as a means of upward mobility, and Mireille is simply a casualty of his progress.

Despite how challenging much of the book can be, it is also hugely rewarding, with breathtaking moments in each chapter. Mireille does everything in her power to bury her identity, to become no one, but at times she cannot keep her old life from the surface:

… as the heat of the day rose and filled the room, it suddenly all came back to me, who I was and who I loved and who I needed. The memory of my life, the weight of it, threatened to break my body more than any man could.

The uglier aspects of reality—sexual violence, poverty, cruelty—rarely get fair treatment in contemporary literature. They are glossed over with vague language, entrenched in metaphor or left out altogether. Gay never does the reader this disservice. Rather than acting as a buffer, her exact, direct style will keep readers engaged and force them to confront the difficult truths of Mireille’s story. Above all, readers will be left to consider both the great power and the limitations of the human spirit.

Thomas Michael Duncan lives and writes in Syracuse, NY. His reviews have appeared in such places as Blood Lotus Journal and PANK and his fiction at Necessary Fiction and Little Fiction, among others. You can find him online at tmdwrites.tumblr.com.