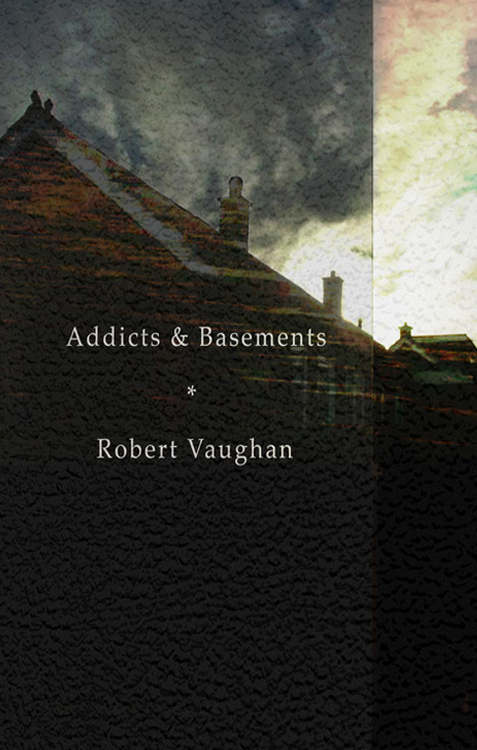 Robert Vaughan’s collection, Addicts & Basements (read “attics” for addicts), is a book that takes place in two worlds; the above-ground, out-of-doors world of the first section, “Addicts,” and the otherworldly realm of the below-stairs, “Basements.” Vaughan Stretches his narrative muscles and explores the architecture of the human in these poems, flash fictions and prose poems. Long a fan of Vaughan’s work, ever since encountering his writing at the online writing site, Fictionaut, I find his eye for detail and the manner in which he reveals the jagged seams of his characters’ lives to be refreshing and empowering.

Vaughan tips his hat to his influences in the epigraphs to each part of the collection. In the opening section, “Addicts,” he cites Burroughs, Woolf, and Morrisey. In the “&” section, it is Saint Exupery he lauds, and in the second section of the book, “Basements,” he gives the readers lyrics by the B-52s and creaky bagpipe music.

When a book begins with the line, “When my ex Fed-Exed me a small box of her pubic hairs it ranked right up there among the strangest things I’d ever received in the mail,” you know you’re in the hands of a peculiar form of genius. Vaughan’s poems range from the straightforward poetic to the obtusely odd and all points in between. There’s a sexuality and raw brilliance about this volume of poetry from one of the finest of our present day poets, and a journey through the architectures and immoralities of this volume is a journey into the creative psyche of Milwaukee-based Vaughan.

Bookended between the opening poem, “The Femur,” and the closing one, “The Bagpipe Refrain,” are a collection of pieces that summon the ghosts of Bukowski, Brautigan, and DeQuincy. Vaughan plays with the charged eroticism and nocturnal wanderings of a panoply of characters in this book. This sexual energy is seen best in “Remnants,” as the speaker says, “I can smell you in / my bed sheets / on my hands, toes / in the sockets of my knees…” and in particular at the end of the poem as it closes, “the sand shifting / tides rolling, beckon / swell / oh, the swells.” In “Feast,” he writes, “I had this dream slide over me, like a silk scarf slips from the neck…leaving something different than a memory. A haunting.” Vaughan is unapologetic in his tackling of the erotic, and presents the reader with many wonderful moments of intimacy in this collection.

Truth be told, it is in the dark, hidden corners of the basements where this collection really earns its chops. Vaughan goes underground to mine the darker side of his characters in this section of the collection. Vaughan taps into our collective consciousness as he explores the fears and hidden desires contained in those underground spaces so inimical to much of America. In “Gauze, A Medical Dressing, A Scrim,” Billy, a young boy, chooses to exile himself in the basement of his house, and soon the family dachshund disappears forever in the basement, having, “accidentally ventured downstairs, she was never seen again.” The piece ends with a discovered note in the family laundry, from Billy, which has the rest of the family “cran[ing] their necks toward the basement.” In the playful style of Vaughan’s, the reader is invited into the eerie and somewhat otherworldly universe the writer has revealed in these “Basement” offerings.

What marks Vaughan’s work as special is how he navigates the distances between the wide-open spaces of the world; see, “The Fallow Heart,” and the cloistered depths of a basement apartment, in “A Wonderful Life.” Robert Vaughan is one of the best proponents of flash fiction writing at present, and his ability to turn a phrase and capture a lifetime is to be admired. He is not a writer who harbors any doubts on the page and his poignant, witty, and at times irreverent writing in Addicts and Basements brings the reader work from a writer in full flight.

Robert Vaughan leads writing roundtables at Redbird-Redoak Writing. His writing has appeared in hundreds of print and online journals. His short prose, “10,000 Dollar Pyramid” was a finalist in the Micro-Fiction Awards 2012. Also,“Ten Notes to the Guy Studying Jujitsu” was a finalist for the Gertrude Stein Award 2013. He is senior flash fiction editor at JMWW and Lost in Thought magazines. His poetry chapbook, Microtones, is from Červená Barva Press. His second chapbook, Diptychs + Triptychs+ Lipsticks + Dipshits, is from Deadly Chaps.

James Claffey hails from County Westmeath, Ireland, and lives on an avocado ranch in Carpinteria, CA. He is fiction editor at Literary Orphans, and the author of the short fiction collection, Blood a Cold Blue. His work is forthcoming in the W.W. Norton Anthology, Flash Fiction International.