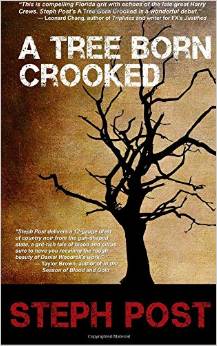 Steph Post’s debut novel, A Tree Born Crooked, shows a lot of promise. It is a good novel that might have been a great novella. The plot is slim, and Post paints each scene with the same level of detail, never backing out to switch between brushes. In some cases, this even treatment leads to beautiful description and a real sense of immersion in the rural Florida setting:

The boys put on country accents and tried to get friendly with the locals. They called the men ‘old-timers’ and cracked jokes about hillbillies screwing their daughters. There was always a fight. Some musclehead in a polo shirt would grab a local boy’s girlfriend and not know how to back down. After the first punch, though, it was usually over. The college kid went down, the girls screamed and the guy’s buddies protested, but didn’t make a move. That usually ended the night.

In other places it feels like unnecessary detail that makes the story drag and readers may find it difficult to determine the most important events of the narrative. James, the protagonist, comes back to his hometown after his father’s death. On his return, his brother, Rabbit, tries to involve him in a robbery. After a woman is killed and the money from the heist is taken, the brothers join Marlena—the daughter of a bar owner named Waylon who was involved in the robbery and has since disappeared—to try and recover the missing cash while on the run from a local gang known as the Alligator Mafia. The search for the money is the central conflict of the novel from that point on, and it carries the action.

A Tree Born Crooked is part of a larger movement that has been coined “country noir.” This style was first recognized with writers like Daniel Woodrell, and Post bears many of the stylistic choices that Woodrell might use. Country noir combines elements of film noir with a rural setting, and there are many areas of the narrative in which Post does this to great effect. However, the noir elements come into play later in the book than would normally be expected. Some readers could encounter what feels like a sharp turn about a third of the way into the novel. Readers with an interest in country noir will likely enjoy what Post has to offer. Those unfamiliar with the genre might be better off starting with a more established example before passing judgment on it as a whole.

The main point of complexity within the narrative is James. He represents a classic Byronic hero, and Post does an excellent job of painting him as such:

James felt the spark of anger inside him ignite. The spark was always there, deep in his belly, or sometimes he could feel its slow heat burning somewhere in his chest, behind his lungs, between his rib cage and every breath. It would smolder for days, for weeks even, and then something would come along and give life to the flame.

James’ anger serves as a great narrative counterweight to the characters he interacts with, including Rabbit, who is addicted to prescription painkillers, and Marlena, who is in many ways an inversion of the clichéd damsel-in-distress with her own agenda separate from the brothers. These characters have chemistry that holds most of the action of the book together. Watching them try to exist in a world beyond their control is a definite highlight of the novel.

The pieces are all here. The flaws are in the execution. There are times when it’s easy to see how the third person close perspective that Post employs could have been a first person in earlier drafts. The visceral nature of the prose certainly lends to that possibility, and it might have been interesting to see more of the interiority of a character like James. There are times when the events that bring the novel together take a backseat to the external conflict. There is one point in the novel where James and Rabbit finally talk about the event that begins the novel (the death of James’ father). In most literary fiction, that would carry through as the main question of the story, but Post only really latches onto that conflict for a couple of pages before returning to the “action” of the novel. Without seeing much of James’s inner life, there are times when it seems he even forgets about his father’s death.

Whether a description has a greater purpose to the narrative or not, the same level of care is given to each setting, drowning out some of the important events in the narrative. Everything is very visceral, which works well in many passages, but too much description makes some places seem more important than they are. Every passage is in the moment, and those moments last as long as the scene dictates. Post’s style is more akin to cinematic storytelling than traditional narrative. For some readers that will be an issue, but others will find that level of immersion makes the book’s pages practically turn on their own. The target audience for A Tree Born Crooked is probably the established fan of country noir, but Post’s debut is worth a look from anyone who enjoys a good anti-hero narrative.

Steph Post is a novelist, short story writer, editor, reader, teacher and dog lover. She received the Patricia Cornwell creative writing scholarship, won the Vereen Bell award for short fiction, and was a semi-finalist for the Big Moose prize for fiction. She loves coffee, is obsessed with the television show Justified and enjoys reading classic literature when she’s not too busy being a badass.

Matt Kimberlin received his MA from Missouri State University. He has contributed to Unstuck, Moon City Review, and Mid-American review, and his fiction has appeared in Paddle Shots. He is currently a PhD student in fiction at University of Louisiana at Lafayette, where he teaches and serves as a fiction editor for Rougarou. You can follow him on Twitter: @MattWKimberlin