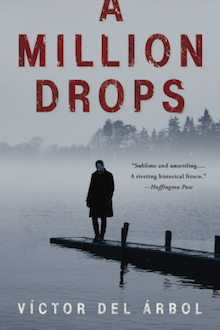 All families have secrets, but some families have more secrets — and deadlier ones — than others. This might be an accurate summary of Víctor del Árbol’s novel A Million Drops, but describing it as such would run the risk of oversimplifying a story that is considerably more complex. I fear it is this very complexity which has made his work unavailable in English until now. Yet this Spanish-language (Catalan by birth) crime writer deserves to be better known, as he already is in other countries, particularly France, where he is a bestseller and has won the Prix du Polar Européen.

‘Crime fiction’ is perhaps also a misleading way to describe his books. The author studied history at the University of Barcelona and previously worked for the autonomous Catalan police force, and he makes good use of both backgrounds in his novels. There are murders taking place and they do get investigated, but they are always linked to Spain’s troubled past, with profound and unsettling ramifications. Therefore, unmasking the perpetrators does not provide the catharsis that it might in more traditional crime fiction. This is a very dark view of the world, in which we are doomed to pay the price for the mistakes of past generations.

Perhaps the best way to describe A Million Drops would be as a political thriller with literary and philosophical inflexions, but also a cracking good story.

It is initially the story of a brother and sister, Gonzalo and Laura. Gonzalo is a rather middling lawyer married into a rich and powerful family, while Laura is a policewoman. They are the children of Elias Gil, a much-fêted antifascist hero, and Esperanza, their secretive mother of Russian origin. Laura’s young son is kidnapped and killed at the very outset of the story, and she is on the trail of the suspected murderer, a Russian gangster called Zinoviev. When Zinoviev is shot dead, she is the first one to be suspected of killing him in revenge. But then Laura herself is found dead, a suspected suicide. However, her police partner Alcazar refuses to believe that and gets in touch with her estranged brother Gonzalo to help him find out the truth. This complicated set-up takes no more than a few pages and then we are plunged into the backstory that leads to Laura’s death.

The bulk of the novel describes how Elias Gil arrived in the 1930s Soviet Union as a newly minted engineer with Communist leanings, and how he changed from being a carefree and idealistic youth into a suspicious, brooding and ruthless fighter against the Fascist dictatorship of Franco. Del Árbol’s historical research is flawlessly interwoven with the storyline and we as readers bear witness to one of the most horrifying examples of Stalinist cruelty: Nazino Island. Elias is arrested and sent to this infamous place on the river Ob in Western Siberia. The purpose of this 1933 mass deportation of 6000 political prisoners and petty criminals to a swampy island in the middle of nowhere, 500 miles away from the nearest settlement, was supposedly to settle that uninhabited part of Siberia. However, no preparations were made for this and anarchy soon broke out within the camp. It was impossible to escape and survive in such a desolate region, and within a few months at least 4000 people died of dysentery, hunger and violence, and there were numerous cases of cannibalism.

The affair was ‘buried’ by Soviet officials until 1988, and this book excels at showing what happens when such atrocities are never publicly acknowledged and survivors have to live with their unbearable secret. Elias survives the camp, but carries a deep guilt with him forever after for not being able to save the woman he loved, and for having allowed his physical survival to triumph over any human decency. This story of humans being driven to the very extremes of behaviour, reduced to animal instincts, is hard enough to read about. However, there is an additional layer: that all political ideals and movements are equally corrupt, that they are all about personal power, cruelty and dominance over others.

When Elias returns to Spain in the midst of the Civil War, he is given a lesson in detachment and objectification of humans by a rather disdainful Communist mentor:

The people are a euphemism. The people do not exist. They are people when they’re in our interest and stop being people when they are not… The law does not belong to the people, it belongs to those who govern.

This gritty view of history where ideologies are simply interchangeable weapons in the hands of authoritarians resonates throughout the book. Del Árbol has a remarkable ability to hone in on a particular physical detail and then zoom out into a more general philosophical observation about humankind, all within the space of a few sentences or a paragraph. This switching of lenses from microscope to telescope is very effective in the historical scenes:

Elias was strong, probably stronger than this threatening man. But he knew that brute force had nothing to do with reputation into the world he’d been hurled into. His pride told him that he should cross the invisible line in the rotten straw… And yet he didn’t move… Fear was the only kind of strength that mattered here. Those who inspired it ruled the world, always had and always would. A small number of men endowed with uncommon cruelty controlled the subservient masses.

This style is less successful in the contemporary scenes, particularly those where two individuals confront each other. The dialogue slows down almost to a standstill as we enter each individual’s mind and often lengthy back story. Even more confusing to the reader, there are many secondary characters (Vasili Velichko the Soviet official, or Lola, Gonzalo’s wife, or the tramp Floren Atxaga) who are likewise introduced with a cornucopia of psychological details and back stories. These, however, later prove almost irrelevant to the story. We read on, because some of the characters seem genuinely fascinating and well-rounded, because we are not sure if they will move centre-stage later on, but quite often they don’t go anywhere, which was disappointing. Yet I wonder if this unhurried pace and head-hopping by an omniscient narrator are deliberately mimicking the style of the 19th century novels of Victor Hugo or Tolstoy. The alternation between panoramic historical scenes and deeply personal scenes of simmering tensions certainly reminded me very much of War and Peace, but the shifts here are more abrupt, the scenes nearly always ending on a cliff-hanger, as if to make a concession to the thriller label.

The language also sticks to the American thriller mode, relatively unadorned, treading a very fine path between understated emotion and clicheed pathos. It does not always succeed to steer clear of the latter, although I am not sure how much of this is because of the translation, but when it does work, it certainly is most affecting:

Two months later, a group of men found a black hand floating in the jetsam. The following day they found a black leg several miles away, in the women’s camp, and for the next several days, body parts appeared all over, including at the town church. But no one found the head. Until one morning, when dawn broke blue and luminous with the promise of a beautiful day, and the head appeared on a stake in front of the Senegalese barracks, a sign on his forehead: ALLEZ! ALLEZ, SALOPE!

Any compassion we feel for Elias initially fades away as we see him becoming as cruel and vengeful as his enemies. This is a dark story of betrayal and counter-betrayal, revenge and long-held secrets and resentments. Not even his closest friends and family know exactly what haunts this man.

The title is symbolic not just of the story, but of the constant efforts that we must make to come to terms with the past. Early on in the book, Gonzalo is told the following about his sister:

I told her that she couldn’t fight all the evil in the world by herself, that her efforts were a drop in the ocean. And you know what she said to me? ‘What is the ocean, if not a million drops?’

It may only be the isolated efforts of a few people to make sense of their family history, as well as their country’s history, but it is a beginning. Víctor del Árbol dares to address issues which are still brushed under the carpet in Spain, and he does it with engaging, troubling stories rather than polemical rhetoric. Perhaps there are a few too many coincidences towards the end of the story to make this a truly successful classical crime novel; however, this ambitious panorama of 70 years of Spanish history is an eye-opening and unforgettable experience.

Víctor del Árbol was born in Barcelona in 1968. He spent five years as a seminarian at Our Lady of Montealegre and later studied history at the University of Barcelona. As the recipient of the Nadal Prize, the Tiflos Prize, and as the first Spanish author to win the Prix du Polar Européen, he has distinguished himself as a notable voice in Spanish literature.

Lisa Dillman translates from Spanish and Catalan and teaches in the Department of Spanish and Portuguese at Emory University. Some of her recent translations include Signs Preceding the End of the World, by Yuri Herrera, which won the 2016 Best Translated Book Award; Rain Over Madrid, by Andres Barba; Monastery, co-translated with Daniel Hahn, by Eduardo Halfon; and Salting the Wound, by Victor del Arbol.

Marina Sofia is a global nomad, reviewer, and writer, currently calling the UK home. She is Marketing Manager for Asymptote Journal for world literature and a regular contributor to Crime Fiction Lover. She has published poetry in online and print journals, which is a wonderful procrastination when she should be working on her novel.